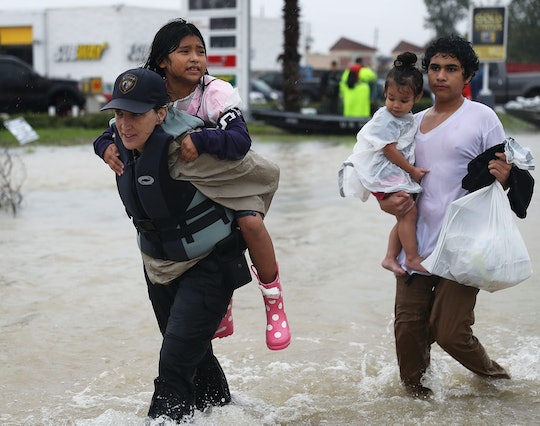 How To Help Diaper Banks In Texas Following Hurricane Harvey, Because It's So Necessary Right Now

Watching the coverage of the storm in Texas, especially Houston, is devastating. With so many people fleeing their homes for shelters, there's a huge demand for help. There are tons of ways to show you care from far away, one of which is helping diaper banks in Texas, specifically the Texas Diaper Bank in San Antonio, since it is already on the ground and distributing them to shelters in need.

Think about it: If you were evacuating your home, you'd obviously bring some diapers for your baby. But wading through chest deep water to get to a shelter or somewhere safe means that you can't bring a lot of them with you — and they may even get ruined in the process. In addition to families not being able to bring their entire stash, shelters often don't provide diapers and neither do disaster relief agencies. So once a parent runs out, even in a shelter, there might not be any diapers to keep their infants dry and comfortable — and quiet — during this incredibly difficult and trying time.

Diapers aren't just for babies, either. Seniors and other adults with incontinence are also in need. Luckily, there's a way to solve this problem. As The New York Times reported, the Texas Diaper Bank has been providing diapers and other incontinence supplies to families in need and shelters for over 10 years. And right now, it could use as much help as possible to make sure everyone's covered.

You can make a cash donation through the website or, if you know someone in the area or are near the center yourself, can drop off new diapers at 5415 Bandera Road, Suite 504, San Antonio, TX 78238. You can even order diapers on Amazon and have them sent there. It will also takes wipes, bottles, blankets, and new clothes for the disaster kits it puts together for those in need.

Since the Texas Diaper Bank has been around for a decade and helps people all the time (and not just during a disaster), you can be sure that your donation is going to help someone in need eventually. The organization began years ago simply distributing diapers to lower income families in San Antonio, but after there was flooding in San Marcos in 2015, it started a disaster relief program.

Jorge Medina, the director of the Texas Diaper Bank, told NPR's Morning Edition that the San Antonio area is expecting to welcome over 10,000 evacuees, so it will first distribute diaper kits to evacuated families locally. Then it will focus on getting diapers to families in surrounding areas.

Watching the disaster from far away can be frustrating and upsetting, but if you want to make a difference, donating some diapers and wipes is a good place to start. It seems small, but any parent knows that an ample supply diapers and a happy baby mean everything.

More Like This
How Does Elf On The Shelf Work? A Simple Guide For Parents
Meghan Markle Spent Her Thanksgiving Volunteering For A Cause Close To Her Heart
Over 10,000 Sippy Cups & Bottles For Toddlers Recalled Due To Lead Poisoning Hazard
14 Baby Names Inspired By 'The White Lotus' That Deserve A Round Of Aperol Spritzes