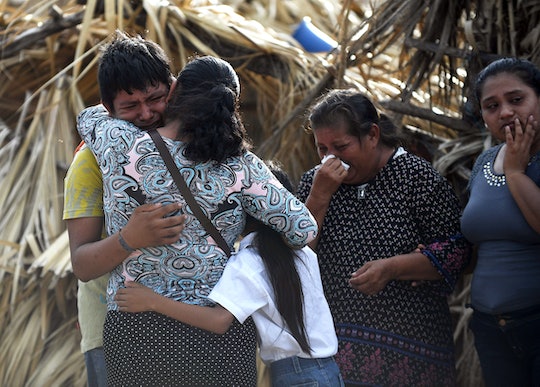 The sky reportedly turned green in parts of southern Mexico on Thursday night, moments before an 8.2 magnitude earthquake hit. Buildings were leveled by the earthquake, the strongest felt by the country in at least 100 years, and people were killed. At least 61, according to The New York Times, though that number could continue to rise as rescue crews seek out victims within the rubble. Thousands of people were affected by the shock, and will continue to be affected for the foreseeable future. We need to help the Mexico earthquake victims; it's going to be a long road ahead to recovery, and they will need all the help they can get.

While the earthquake was felt by tens of millions of people throughout Mexico and as far away as Guatemala, the southern states of Chiapas and Oaxaca were hit the strongest. These states were the closest to the earthquake's epicenter in the Pacific Ocean, according to The New York Times. Mexico City, which was devastated by an 8.1 magnitude earthquake in 1985 that killed 10,000 people, was also affected by the earthquake but was able to sound a warning over loudspeakers. The city was shaken, but no one was seriously injured. The same could not be said for the provincial city of Juchitán; perhaps the hardest hit of the areas, the city of 100,000 people lost one-third of its homes and 36 people died. Their hospital was nearly destroyed, leaving medical staff to work on injured residents in the parking lot by the light of their cell phones.

Mexican President Enrique Peña Nieto visited the ravaged city of Juchitán on Friday, and has declared a three-day period of mourning, and reassured locals that the government would offer aid to help with reconstruction. In fact, several world leaders have stepped up to the plate as well. The heads of state for the Latin American countries of Colombia, Chile, Ecuador, Bolivia, Venezuela and Spain have all reached out to offer their assistance, as has Canadian Prime Minister Justin Trudeau.

Unfortunately, President Donald Trump has yet to offer any form of assistance or even acknowledge the earthquake in the slightest. Which is particularly galling, considering the aid Mexico offered to the United States when Hurricane Harvey caused flooding and devastation throughout Texas. Mexican Red Cross volunteers entered the state armed with trailers containing rice, beans, coffee, chocolate, 300 beds, nine generators, mobile kitchens and telecommunications equipment. Trump has never acknowledged their aid, and has yet to offer any reciprocal help.

Whether the United States government aids Mexican earthquake victims or not, private citizens could (and should) rise to the occasion. While direct relief efforts have not been established yet, several reputable national charities exist.

Donating to Mexico could become even more needed in the coming weeks; Hurricane Katia is expected to make landfall off the Atlantic coast of Mexico on Saturday. It's simply too much for one country to bear; thankfully, they seem to have (mostly) good neighbors who are watching out for them. As Juchitán mayor, Gloria Sánchez López said during a phone interview with The New York Times, their country is in the midst of: