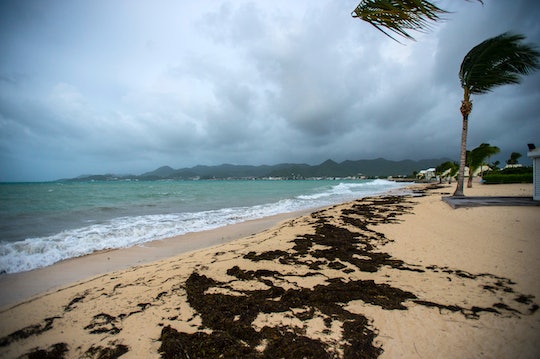 Hurricane Irma, a Category 5 storm that's grown to become the most powerful Atlantic storm in recorded history, made landfall early Wednesday morning, battering the Caribbean islands with winds up to 185 miles per hour. Although its path is far from complete, you may be wondering how to help Antigua, Barbuda, and Saint Martin, which were among the first areas hit by Irma. Communication with the islands has been impeded by the storm, so the full extent of the damage still isn't clear as of late Wednesday morning, but preliminary reports indicate that neither island escaped unscathed.

French Interior Minister Gerard Collomb told the Guardian that Saint Martin's government buildings, the sturdiest on the island, had been destroyed. It's likely that "more rustic structures have probably been completely or partially destroyed," Collomb said. The French government has confirmed blackouts and flooding across Saint Martin, and Radio Caribbean International has tweeted several photos of partially submerged cars and wind-ravaged hotels. The northern half of Saint Martin is a French territory, and the French Red Cross has been mobilized to assist with disaster relief efforts. The southern part of the island is a Dutch territory, and the Netherlands Red Cross is also seeking donations.

The extent of the damage on Barbuda and Antigua is unknown at this point, but no casualties have been reported. Most of the Barbuda 1,600-person population is localized in the city of Codrington, on the west coast. The flat terrain of the island makes it particularly vulnerable to flooding, and CNN has reported that the eye of Hurricane Irma was bigger than the entire island. According to NBC News, many homes on Barbuda lack foundations or sturdy roofs, making them susceptible to wind damage. According to The Antigua Chronicle, the roof of the island's only police station was "ripped off," causing officers to flee to the fire station and a community center currently functioning as a shelter. Sustained wind speeds of 119 miles per hour were recorded, with gusts reaching up to 150 miles per hour. There has been no communication with the island since its main communication tower was downed around 12:30 a.m. Atlantic Standard Time (which currently coincides with Eastern Time).

Still, Antigua and Barbuda Prime Minister Gaston Browne remained optimistic, tweeting early Wednesday morning that Antigua had been "spared the worst of Irma." In a press release obtained by the Caribbean New Service, Browne said, "With regard to Barbuda, preliminary reports indicate damage to rooves [sic] and to some buildings, but I have had no report of any fatalities." He stressed that Barbuda was well-prepared for the storm, and a shelter had been constructed in advance. Browne has already toured much of Antigua, and plans to visit Barbuda as soon as possible. The Antigua airport is expected to be operational by 2:00 p.m. on Wednesday. In the mean time, you can donate to the Antigua and Barbuda Red Cross.