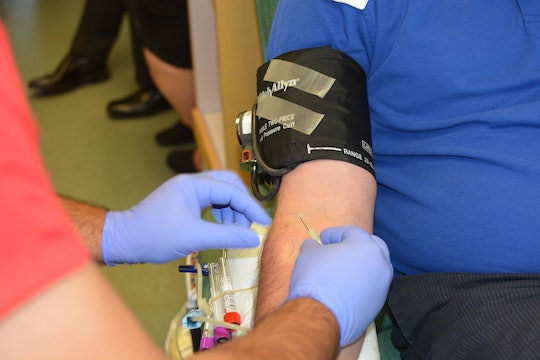 How To Help The Orlando Nightclub Shooting Victims

Although authorities initially reported that about 20 people had been shot dead in an ambush at a popular gay nightclub in Orlando overnight, the confirmed death toll has risen to about 50 as investigators uncover exactly what happened during the lone gunman's attack and subsequent hostage situation and police standoff. It's a horrendous, devastating situation. Thankfully, as those numbers rise, tips on how to help the Orlando nightclub shooting victims are also making the rounds. At the moment, the community is in need of everything from blood donations to support for the LGBT community.

Update: The Orlando Sentinel has reported that local blood banks are at capacity; Donors have been asked to return in the "coming days" to give blood instead.

CNN reported that about 53 people who were in the nightclub, Pulse, were injured, up from the 42 originally reported, and at a press conference Sunday morning, Orlando mayor Buddy Dyer called for solidarity. "We need to stand strong, we need to be supportive of the victims and their families," he said in a statement.

In the wake of a terrible tragedy, especially one with a such a mind-boggling casualty count, it's easy to feel paralyzed with fear, and, in many cases, a sense of helplessness. But there are ways that people can help those who have been affected, whether they lost their lives or loved ones in an act that's since been identified as "domestic terrorism."

As news of the havoc wreaked in the nightclub between about 2 a.m. and 5 a.m. June 12 began permeating news coverage, Florida Sen. Marco Rubio tweeted to urge people who live in Central Florida to give blood to help the victims. The Orlando Sentinel reported that OneBlood was requesting donations to benefit the approximately 42 people who are being treated in hospitals following the massive shooting, imploring all O negative, O positive and AB donors to head to a donation center ASAP, and ideally today.

Although the newspaper reported that www.oneblood.org, the site donors use to find a donation, had crashed as of midmorning, it's now up and running. The crash is almost certainly a sign that may people were looking to donate, and anyone who still wants to can visit the site or call 1.888.9Donate.

Whenever there is a mass shooting in the United States (and this happens far too often) hospitals often receive an onslaught of survivors, and medical professionals work tirelessly to save as many lives as possible. The situation is no different in Orlando Sunday morning, as ABC News reported that at least 42 people have been transported from the club to various hospitals.

Orlando Regional Medical Center was placed on lockdown after it began caring for several gunshot victims. Anyone, anywhere can make a donation to the hospital easily through its website. Although this and other hospitals are currently running on existing resources, it's not yet known what kind of rehabilitation the mass shooting victims may require, and public support has the potential to make sure they get what they need as they recover.

Not much is known about the shooter in this incident, or why he chose to target a gay nightclub. While it's possible that killing gay patrons in particular wasn't his goal, it's also very likely that that's exactly what he set out to do. Either way, Pulse opened in 2004 to "promote awareness of the area's lesbian, gay, bisexual and transgender community," USA Today reported, and with its nightly themed performances and educational events, it was a haven and symbol of pride for many.

So, people can show support for the LGBT community by donating to Orlando's LGBT Center or to the Orlando Youth Alliance, a nonprofit that offers peer-based support services for LGBT youth ages 13-24. Even just posting support for LGBT people on social media can make a big difference.

Sounding off on social media is now a natural response to any major national or international event. So many people looking for help and solace as the full ramifications of the Pulse nightclub shooting continue to hit the news will turn to sites like Twitter and Facebook as well. So anyone with any information, whether it's about where to give blood, numbers for counseling and crisis services, dates and times of vigils and memorial services, links to crowdfunding accounts to help the victims and their families as they're created, or just a simple gesture of love, should post it.

An event like the shooting at Pulse showcases the very worst in humanity — especially when eyewitness accounts demonstrate the full scope of the horror — but they can also show that Americans come together to help one another in the most harrowing of circumstances. No act of kindness or support is too small, especially when so many people are suffering in unimaginable ways.

More Like This
Keke Palmer Casually Drops Her Baby's Sex On Jimmy Fallon
Does The FDA's Plan To Limit Lead In Baby Food Go Far Enough?
Freeze! The Single From The New 'Bluey' Album Just Dropped
Marie Kondo Gives Up Tidying Post-Kids, Sparking Joy For Moms Everywhere
What Parents Are Talking About — Delivered Straight To Your Inbox