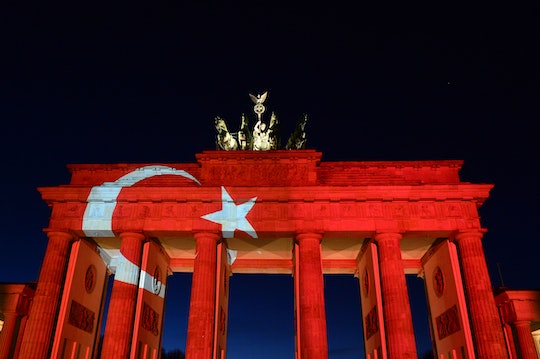 How To Help Victims Of The Istanbul Attack

On New Year's Eve, a gunman opened fire in an Istanbul nightclub, killing 39 people. While authorities are still looking for the shooter, it's hard not to want to help the victims of the Istanbul nightclub attack, especially since many of them were foreigner and tourists. There were victims from 14 different countries, including India, Morocco, Jordan, Canada, Russia, Tunisia, Saudi Arabia, and Kuwait according to Turkish authorities.

There were reportedly 600 people in the Reina nightclub and witnesses say that the experience was, as one can imagine, absolutely terrifying. One witness told CNN, "After the gunfire everyone started to run toward the terrace. We ran as well. There was someone next to me who was shot and fell on the floor. We ran away and hid under the sofas."

Another one yelled at journalists on the scene, "These crazy people came in shooting everything."

There were reportedly around 200 bullets fired and Turkish police have arrested over eight suspects. On Monday, Turkish police released a photo of man in a dark winter coat who they believe to be the gunman, since his fingerprints were found at the scene.

ISIS has claimed responsibility for the attack, according to The New York Times, calling the gunman "a hero soldier of the caliphate.”

There is not much you can do from afar to help the victims, but there are some ways to show support, even if you're oceans away from the scene.

If by any chance you're overseas, there are donation centers where you can donate blood to help directly. But the Red Cross operates all over the world, so if you donate blood at a local blood bank, you can show solidarity for the victims.

Go Right To The United Nations

OK — don't actually go to the United Nations. But the international organization has a portal directly related to helping victims of terror attacks. Inform yourself and see what you can do under the UN's directions.

Donate Money To Organizations On The Ground

The Turkish Red Crescent Society is always accepting donations. They also help refugees from Syria and Iraq, so you know your cash is going to help someone.

It's hard to know what to do when terror strikes far away. Donating blood and money to organizations that are closer to the situation is always a good place to start. As is speaking out on social media, which can seen fruitless — but making sure that each and every attack doesn't just get lost in the news cycle is key to making sure lawmakers know you care and to show solidarity with people who are most vulnerable and hurting after an attack.