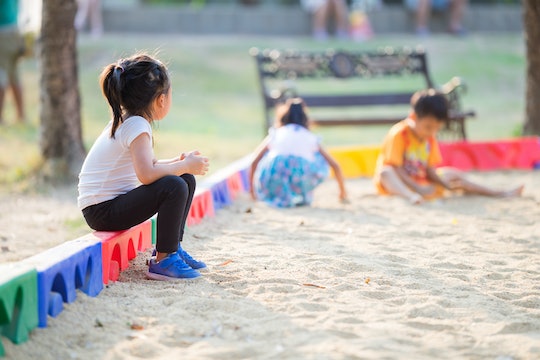 Here's How To Help Your Shy Kid Feel Confident Making Friends, According To Experts

My kids are not shy. At all. They will walk up to pretty much anyone and make friends rather quickly. But, making friends doesn't necessarily come easily to every kid. I was a shy kid myself, and my parents often wondered how to help a shy child make friends. Sometimes kids just have trouble relating to their peers and forming the bonds that we perceive as normal during childhood, even early on, but there are ways that parents can help shy kids make friends.

To understand why children may experience shyness initially, I asked developmental psychologist Michael Mintz, PsyD, at Children’s National Health System to weigh in. He tells Romper that the process of experiencing shyness starts long before children can talk to one another, stemming from babyhood when children learn about familiarity. Dr. Mintz also explains how emotional security plays a factor in developing shy tendencies. He says that helping children overcome and understand these tendencies early on can help with shyness later on in childhood.

To begin the process of encouraging children to come out of their shell, he recommends that parents re-evaluate where their child's feelings are coming from when they initially label them as shy. "It is also important to avoid labeling children as 'shy.' Rather than labeling the child as 'shy,' we can help preschool-aged children put language to their feelings by talking about how they felt when they were approached by an unfamiliar person," he says. "Instead of saying that your child 'is shy,' we can help the child understand how they felt in that particular situation ('you felt shy' versus 'you are shy')."

He also says that avoiding judgement when children don't interact with each other is crucial. "Parents should try to avoid placing a value judgment on shyness (i.e. making the child feel that shyness is necessarily bad) and instead help him recognize the feeling without placing judgment on it. One way of doing this is telling her children that we also sometimes feel shy, trying to share the experience with them (i.e. 'I sometimes feel shy when I meet new people'). With preschool-aged kids, we can help them understand what we do what we feel shy (i.e. 'When I feel shy, I try to smile and wave even if I don’t feel like talking')," he says.

As children grow, they will inevitably start interacting with one another. Dr. Mintz explains that understanding the expectations of how children relate to one another is important. "For example, toddlers are often excited to see other toddlers, sometimes approaching them or playing simple chasing games. At some point in their second year of life, toddlers start to engage in ‘parallel play,’ in which they will engage in a similar activity alongside another child while referencing the other child. However, toddlers do not typically engage in back-and-forth forms of play, at least not without adults facilitating the play," he says.

Dr. Mintz also explains that adult interaction plays an important role as well, and suggests that familiar settings are more comfortable for children learning how to interact with others. "When toddlers are shy, we often see them avoiding interactions with other children or unfamiliar adults. This is particularly common in overwhelming settings, such as groups of young children (i.e. a Gymboree or the library)" he says.

Maureen Healy, author of The Emotionally Healthy Child, and parent coach at GrowingHappyKids.com agrees that giving children a one-on-one setting to bond with other children is key. She suggests that parents can find an activity that children are interested in and help facilitate their involvement with other children. "Ask your child what she's interested in (for example, painting class, yoga, archery, playing the piano) and then consider setting her up with classes where she'll meet like-minded children. Remember, shy children oftentimes do better in one-on-one settings versus large groups with lots of noise," she says. "Every child needs at least one friend and the best way to make that is if they share a similar interest — it may be cooking, gardening, or something more creative like painting or tennis lessons, but helping your child find something that's of interest to her is essential. It can even be something quieter like joining a children's book club, but finding friends is important."

She also suggests that children use role playing activities with parents in order to help them feel more comfortable when they are around other children. "In addition to making friends over a shared interest, I would coach my child on how to introduce herself and role-play what that looks like," she says. "Oftentimes a child can 'spot' someone he wants to be friends with but doesn't yet have the language to introduce herself. After, she's gotten really good at how to introduce herself. Another tip is to have your shy child bring in a few snacks (that are healthy and delicious) to share with possible friends at lunch or in the classroom. Children will immediately smile, thank her, and want to connect with [her]."

When it comes to helping facilitate children's interactions with others, Dr. Mintz suggests not pushing children too much, but offering praise when they do have a positive interaction. "A good rule of thumb is to not force your young child to engage in interactions in which they do not feel comfortable. Forcing a child to be held by an unfamiliar person, or even sit on a stranger's lap, could be experienced as traumatic child. Some toddlers and preschool-aged kids feel uncomfortable talking with unfamiliar adults, and we should avoid forcing them to do so. Sometimes, young children are quiet but will politely wave to unfamiliar adults when prompted to do so, and small steps in the direction of interacting with unfamiliar people should be praised."

In short? Don't worry too much. There's nothing wrong with being "shy," but if you notice your child is lonely and would enjoy being more social, these tips can help give them some confidence.