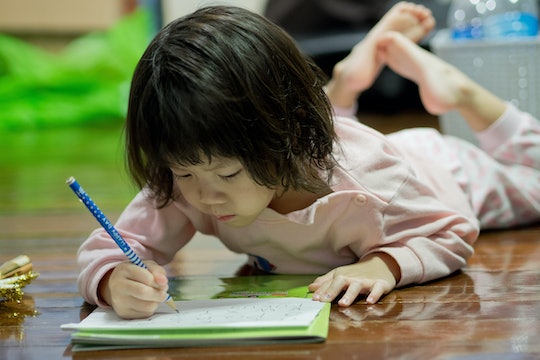 How To Improve Your Child's Memory, According To Experts

When your child can’t seem to remember your instructions, or isn’t retaining new lessons well at school, you may be concerned about their memory. Fortunately, there are ways to boost your child’s memory, although true memory problems are actually quite rare in children. Experts say most issues that seem memory-related actually boil down to attention span.

Kelly Wolfe, PhD, neuropsychologist at Children’s Hospital Colorado, tells Romper in an interview that there are three different types of memory in the human brain, each with its own function.

“The first is called working memory, which is very short-term memory. I talk about working memory to patients and families like a post-it note in the front of your mind, holding information for a few seconds until you do something with it, like repeating a phone number until you can dial it in,” she says. “There are two types of long-term memory. Episodic memory is for things that happened in time, like your memory of going to Disney World or your memory of a grandfather’s funeral. Semantic memory is your memory for facts — you don’t remember when you learned it, you just know it. You don’t remember when you learned humans are mammals, but you know.”

Wolfe says working memory goes through major development in the toddler and preschool years, while both types of long-term memory develop around preschool age and become more reliable during elementary school ages. Jennifer Peterson, OTR/L, registered occupational therapist at Wolfson Children’s Hospital of Jacksonville in Florida, tells Romper in an interview that while memory development occurs naturally, there are ways parents can facilitate it.

“In infancy, it’s important to establish a consistent routine so that babies can learn to remember and predict what comes next. Making sure that sleep patterns are established is also important so that foundations are set for optimal brain development. Infants begin to recall associations in their routines, such as recognizing objects and steps in food preparation that indicate that they will be eating, or that a running faucet means bath time,” she explains.

Both Wolfe and Peterson say playing games involving object permanence — the understanding that objects still exist even if you can’t see them — can help test and develop little ones’ memory skills.

“Object permanence is established at 10 to 12 months and can be promoted through simple hide-and-seek games, such as beginning with a toy partially hidden under a blanket and progressing to fully hiding and exposing it,” says Peterson. “In toddlers, greater sustained attention is established and it is time to focus on more repetitive learning, such as songs with fingerplays and movements, simple nursery rhymes, retelling of simple stories with a sequence, naming and recalling of body parts, and scaffolding tasks, in which the caregiver completes most of the steps and allows the child to complete more and more of the step as they recall and learn them.”

As children get older, Peterson suggests using simple household chores, card games, and more complex songs to build memory skills. Having your child recall the sequence of events in a book or movie and teaching new information they learn back to their parents can also help. Wolfe adds that reducing stress can go a long way to improving memory, too.

“If a child is really stressed when they sit down to do homework, it’s going to interfere with their ability to learn info and show what they know. The multisensory and multimodal instruction, learning and teaching to someone else, practicing over and over, making sure where you’re learning is a quiet place free from distraction, all jive with what we know about learning and priming the brain,” she explains.

While focusing specifically on developing memory isn’t totally necessary (and probably not something parents thought about consciously even a generation ago), it certainly can’t hurt. Even just being on the lookout for certain difficulties your child has with their memory can help get them assessed earlier should they need it.

“It’s definitely best practice for parents and caregivers to incorporate activities that focus on building memory into everyday routines and play,” says Peterson. “If they have concerns — for example, if their child struggles with recalling daily routines or can’t seem to learn sequenced tasks or simple songs and nursery rhymes at the same rate as most of their peers — then a follow-up with their pediatrician is always a good idea. For school-aged children, concerns with academic performance, following multiple step directions and challenges with problem solving skills may be indicative of an underlying concern with memory skills. Often, these concerns can be related to other learning issues and can be uncovered as part of a thorough psychoeducational assessment with a licensed professional.”

Wolfe agrees, adding that parents shouldn’t assume their child’s memory issues are, in fact, memory related. More often than not, they indicate a different problem altogether.

“When parents think there are memory problems, it’s almost always something else. True memory disorders are really rare in kids. Nine times out of 10, it’s an attention concern. If a parent is worried about their child’s memory or attention, I’d encourage them to get evaluated by a licensed neuropsychologist and tease apart where the breakdown in communication is occurring in the brain.”