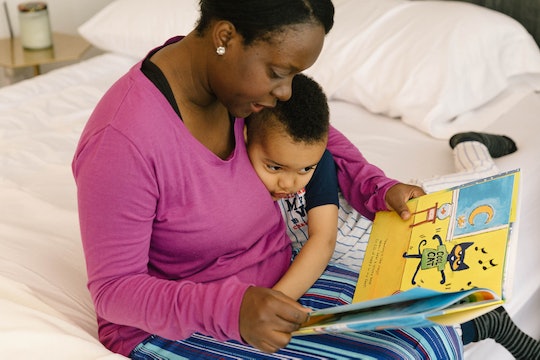 Every winter, parents of school-aged children can expect for their child to come home sick at some point. As soon as I see my daughter sneezing or overly exhausted, I know she’s probably picked up a bug from school. This year I’m a little more worried than usual. The flu virus that has been going around this season is much more intense than previous strains, so parents should know how to keep kids safe from the flu at preschool.

Romper reached out to Pennsylvania pediatrician, Dr. Jarret Patton, who says that the first line of defense might just be getting a flu shot. He says that if you haven’t gotten the flu shot yet, there is still time, and it usually takes about three to four weeks to take full effect. Although this year's vaccine is only about 33 percent effective, Patton explains that it can still prevent a significant amount of severe illness. “Most people would buy a lottery ticket if they were told they had a 33 percent chance of winning, so why should the vaccine be different?"

Along with the flu shot, it’s important to teach your preschooler about viruses and how they spread. Patton suggests that to keep the flu from spreading, you should teach your children about proper hand hygiene and talk to them about covering their coughs and sneezes. Although preschoolers may not pick up preventative hygiene habits straight away, with a little positive reinforcement and encouragement, they can become a little more proactive about keeping themselves protected.

Patton says that the current flu strain is very active at this time, with most states seeing widespread activity. He explains that this year’s strain is particularly virulent, spreading easily and causing more significant symptoms. According to the Centers for Disease Control and Prevention (CDC), the virus that is causing all this havoc is the influenza A (H3N2) strain, which can go on to create more severe illnesses in children and the elderly. The CDC website explained that when H3 strains of the flu virus are predominant, more people end up in the hospital, and can also die from the effects. Patton says that this flu season, there are already multiple cases of children who have fallen victim to the flu and unfortunately lost their lives.

If you have had the flu this season, or know someone who has, you may have heard how severe it is. There have been a few cases of seemingly healthy young people dying from the flu, reported NBC news, mostly due to it being a newer strain which can overwhelm the immune system in some individuals. NBC explained that older people may have been exposed to a similar virus, so their immune systems kind of know what to expect, and don’t respond with too much reaction. In younger people, however, because the virus is newer, it may trigger their immune systems to overreact and cause secondary infections.

Along with Patton, the CDC also suggested having children older than 6 months get the flu shot as their first protective measure and encouraging them to wash their hands appropriately. They also recommended keeping sick children at home so the virus doesn’t spread further. If you do have a sick a child, they advised that you get them to a doctor as soon as you can so that they can be tested and evaluated for the flu. If your child ends up with a positive flu diagnosis, the CDC noted that your doctor may prescribe an antiviral medication, like Tamiflu, which works best when given within 48 hours of getting sick.

My family doesn’t get the flu shot every year, and I used to pride myself in never getting sick. But this year, the flu hit me and my family like a ton of bricks. My children, my husband, and I all had 10 straight days of fever, followed by three weeks of cough and congestion. My elderly in-laws live with me, and when the flu hit them, it turned into pneumonia requiring hospitalization.

All I can say is that, from now on, I will be getting the flu shot every year for me and my family, because the torture of this year’s flu knocked some sense into me. If you and your children haven’t gotten the flu vaccine yet, it may be time to consider it.