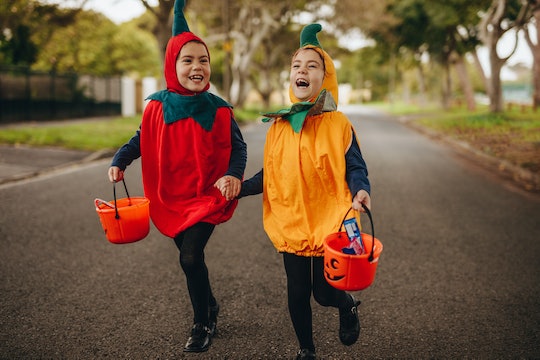 How To Keep Kids Safe On Halloween, The Most Dangerous Night For Pedestrians

Halloween is all about candy, movie marathons, and incredible costumes. But it must also be about safety. When an influx of children take to the streets to score themselves some treats on the spookiest day of the year, it's important parents learn how to keep kids safe on Halloween night.

In 2018, the University of British Columbia published a study in JAMA Pediatrics that names Halloween night the deadliest night for pedestrians, mainly children. After analyzing 40 years of NHTSA data, researchers concluded that the most dangerous time for pedestrians on Halloween is between 5 p.m. and 8 p.m., and children ages 4-8 are most at risk of fatal injuries. As a result, researchers recommend that parents work to make their neighborhoods "car-free" on All Hallows' Eve, but for many communities that isn't possible.

So, how can we encourage our children to look out for vehicles, cross the street with care, and make their costumes easily visible, all while having fun?

Romper reached out to the National Highway Traffic Safety Administration (NHTSA) to find out more about how parents can help keep their children safe on Halloween. According to an NHTSA spokesperson, Halloween is a particularly dangerous day because of drunk drivers on the roads and the increased numbers of pedestrians at night. In addition to staying on sidewalks, looking for cars in all directions when crossing the street, and remaining visible at all times, the NHTSA also recommends avoiding distractions — like cell phones and other electronic devices — while walking.

Between 2004 and 2018, 54 pedestrians under age 18 were killed after being hit by cars on Halloween, according to a Washington Post analysis. Given the heightened risks on Halloween, the National Safety Council urges drivers to watch for children walking on roadways, medians and curbs, carefully enter and exit driveways, look for children in dark costumes, and stay off the road if they are new or inexperienced drivers.

No amount of candy is worth the risk of jaywalking.

New York Assembly member Al Taylor spoke to Romper about the importance of traffic and pedestrian safety during Halloween. He says that while child safety is always paramount, regardless of the time of year, he is happy to have this opportunity to help folks keep their kids safe ahead of the holiday. "Child trick-or-treaters should wear bright colors and a safety light or reflective gear so they are visible to motorists no matter what time of day they go out."

Taylor also says that "young trick-or-treaters should always go out with a responsible guardian, whether it be a parent [or] older sibling or caregiver, especially after dark." Additionally, he encourages children and their caregivers to "stick to sidewalks and crosswalks whenever possible, as well as well lit areas, be mindful of traffic conditions, and follow local traffic safety rules and signs."

But preventing these tragic deaths requires year-round initiatives and community-level interventions that address traffic safety more generally. The Los Angeles Times reported that pedestrians die every 90 minutes in the Unites States, and the World Health Organization (WHO) estimates that more than 270,000 pedestrians die every year on roads around the world.

"It’s a death sentence to walk into the street. And kids, by definition, they make mistakes," Eben Weiss, better known as Bike Snob NYC, told Romper in May of this year after a Governors Highway Safety Association report revealed that 6,227 pedestrians were killed in 2018 — the most recorded since 1990.

"People just drive like nothing ever goes wrong, that kids don’t make mistakes, like kids aren’t there," Weiss continued.

While showing off creative costumes and stocking up on enough candy to last you until the New Year is an important part of Halloween, pedestrian safety should be top priority for your children. Especially if they’re trick-or-treating on their own this year. "No amount of candy is worth the risk of jaywalking," Taylor says.

So, while being mindful of traffic safety measures is important every day of the year, extra caution is necessary on one of the most dangerous nights of the year for young pedestrians.