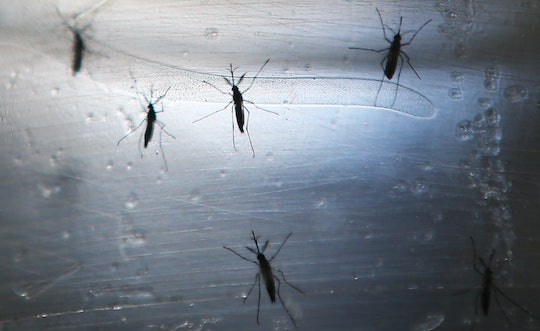 How To Know If A Mosquito Could Be Carrying Zika

The Zika virus has rapidly spread throughout Central and South America in the last year and recent studies have now warned a handful of cities in the United States that the threat is closer than initially thought. As summer has officially begun, mosquitoes will begin to make a more noticeable appearance. Given that you'll likely want to make sure you're as prepared and informed as possible (which is especially important for pregnant women) there are a few clues you can look out for to know if a mosquito could be carrying Zika.

The Zika virus poses the most dangerous threat to expectant moms and their unborn babies, as it’s been linked to life-threatening birth defects, including microcephaly, or unusually small heads and undeveloped brains.

One clue to look out for is what time of the day the mosquito is buzzing around. The Zika virus is spread by Aedes aegypti mosquitoes, which are primarily and aggressively active in the daytime, but they can also bite at night. According to the Centers for Disease Control and Prevention (CDC), these mosquitoes typically lay eggs in and near standing water in things like bucket, bowls, animal dishes, flower pots, and vases. Mosquitoes carrying Zika prefer to live both indoors and outdoors near people rather than animals.

While it might be difficult to get a close look at the mosquito unless you have a microscope (or super-human vision), you can also recognize an Aedes aegypti mosquito by the white markings on its legs and body. If you are able to locate a marking that looks like a lyre (a Greek string instrument) on its midsection, it might be a mosquito that could be carrying the virus. Of course, it's very difficult to distinguish this type of mosquito from another types quickly and accurately with the naked eye, so the most effective and preventative measure you can take is to repel against all types of mosquitoes this summer.

These mosquitoes can be typically found in tropical and subtropical regions throughout the world and have been most prominent in Central and South American countries. But, the CDC published a map a few months ago that showed parts of the United States that could house mosquitoes capable of carrying the virus.

More recently, however, HealthGrove, a health news and medical information website, used data from a recent study by the Public Library of Science and found 10 cities in the United States that would most likely be at risk of the Zika virus.

According to HealthGrove, areas in the South and Southeast of the United States were found to be at the most risk, ranking 1-10. One being the least and 10 as the most risk. Using the following list can also be a helpful indicator if an Aedes aegypti mosquito could be nearby:

The best way to protect yourself from mosquitoes carrying the Zika virus is to protect yourself from all mosquitoes by using insect repellent, wearing long sleeved clothing, and keeping your yards and surroundings clear of standing water. It might be very difficult to get a close look at a mosquito before it bites, but keeping their specific markings and the hours when they're most active in mind can be a useful tool to staying informed and hopefully preventing any dangerous itchy bites.