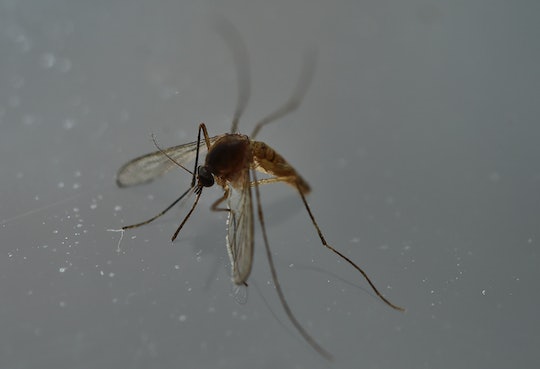 What Does The Zika Mosquito Look Like? The Aedes Aegypti Live In The US Too

The stakes for avoiding mosquito bites this summer are a lot higher than usual. Sure, the itchy bumps are pesky every year, but this year they could also mean contracting a serious disease. The Zika virus epidemic that's been spreading across South America, Latin America, and the Caribbean is expected to make its way north to the United States this summer. As temperatures rise, the mosquitos that carry Zika will became common, especially in Gulf Coast states. To stem the spread of the virus, all Americans need to be on alert. But what does the Zika mosquito look like? And how can it be prevented from spreading disease?

At this point, it has been confirmed by the scientific community that the mosquito-borne Zika virus can cause severe birth defects if contracted by a pregnant woman in the first trimester. There has been difficulty tracking and studying the disease because, for everyone other than pregnant women, the symptoms are relatively mild and resemble a common flu; and, like the flu, the virus is able to mutate extremely quickly. What is not as difficult to track is the movement of its carrier, the Aedes aegypti mosquito. The Aedes aegypti mosquito is a warm-weather insect that's common in tropical regions, but it has been spotted as far north as New York, according to the Wall Street Journal. It's an aggressive biter that feeds day and night and, unfortunately, is very difficult to eradicate. It has the long proboscis mosquitos are known for and small white strips across its black thorax and legs. With an untrained eye, it would be very difficult to distinguish it from any other type of mosquito, so the best course of action is to repel all of them.

The best method for doing so is to wear long sleeves and pants when outdoors and use bug repellant that contains DEET, Picaridin, IR3535 or oil of lemon eucalyptus. People going into areas with higher concentrations of mosquitos, like swamps, woods, and bogs, should treat their clothes and gear with permethrin, a strong and long-lasting repellent.

According to the Centers for Disease Control, even these chemicals are safe for pregnant women. The strongest of them (DEET and permethrin) should be used in moderation if expecting, but the alternative (contracting Zika) is much more dangerous. The CDC does warn against using these products on children under two months, however, and instead recommends mosquito nets.

It's important to note that not all Aedes aegypti mosquitos are carrying Zika. They only become carriers if they bite an infected person. Thus far, there have not been any recorded cases of this type of local Zika transmission in the United States. People have only brought the disease back from travels abroad. Many of those people, though, live in regions where the Aedes aegypti thrive. If one of them is bitten, the epidemic would spread locally very easily. Though an epidemic in the United States is not confirmed, given the prevalence of mosquitos and the regularity of travel between the U.S. and Zika-affected countries (which will only increase with the 2016 Olympics), it does seem likely. It's best to be prepared. Besides stocking up on repellent, be sure your home is outfitted with screens and is free of any standing water that could become an Aedes aegypti breeding ground.