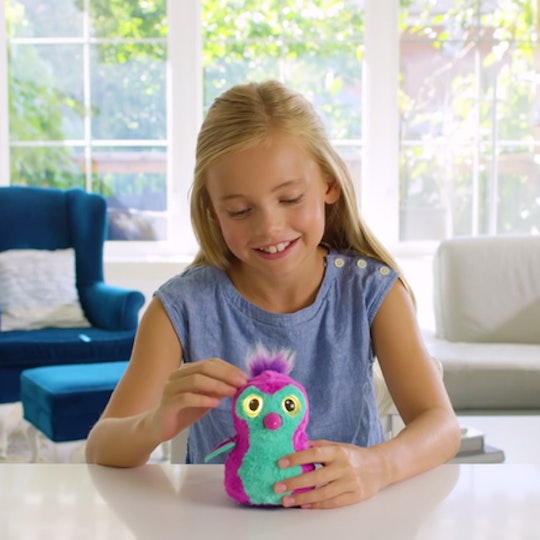 Hatchimals Will Restock Soon, So Take A Deep Breath

I know you're feeling panicked. I know the hours are ticking away between now and The Big Day, and probably your little one is dreaming of Hatchimals. Of course, your little one has no way of understanding the frenzy that has surrounded the cute little toy, and so probably assumes a Hatchimal is in the bag for a Christmas present. Don't panic, parents; you're in luck. Especially if you're wondering how to know when Hatchimals will restock before Christmas. So maybe don't start desperately punching in your credit card number for an insanely marked up Hatchimal just yet.

As you might have heard, Hatchimals have become "the" toy sensation for the under 10 set. The new toy from the Spin Master toy company (which also created the Build-A-Bear Workshop, Etch-A-Sketch, and Tamagotchi) basically flew off the shelves of major retailers back in November and has become an urban legend ever since. Hatchimals are interactive stuffed animals that kids can "hatch" and raise for themselves. They come in five different varieties; Pengualas, Draggles, Burtles, Owlicorns, and Bearakeet. Burtles, Owlicorns, and Bearakeets are exclusively available at Wal-Mart, Toys "R" Us, and Target respectively. Because packaging is everything, Hatchimals come wrapped up in a beautifully-colored speckled egg, which the Hatchimal will "hatch" itself out of, if you can believe it. No wonder kids are desperate to get their hands on them.

Toys "R" Us reported to CNBC that they will continue to restock Hatchimals throughout the Christmas season. Only one Hatchimal per person, of course, and retailing for $59.99 a piece. While that's pretty good news, Walmart will be restocking through Christmas in 1,700 stores across the country and selling them for less than $50 each. Plus, if you manage to get your hands on one you can buy as many as you like. Target is also restocking the toy for the same price as Toys "R" Us, but it's important to get there early; despite setting a limit of two Hatchimals per person before decreasing it to one per person, many people who had lined up at Target stores left empty-handed.

If you don't manage to find a Hatchimal at Toys "R" Us (and I'm sure you will so don't get upset), the store is offering a chance to enter a draw to win a Hatchimal on Dec. 22. Toys "R" Us will be staying open for extended hours to accommodate those of us who are last-minute shoppers, opening at 6 a.m. and closing at 2 a.m. Target is also offering Hatchimal-themed gift cards to disappointed shoppers (although the cards don't guarantee anyone a Hatchimal, so that seems like a bit of a downer).

Happy hunting to all Hatchimal-lovers out there; I wish you the best of luck.