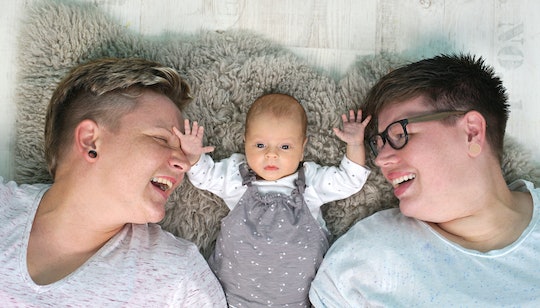 FYI, Putting Your Baby Before Your Marriage At All Times Actually Isn't Good For Them

Having a child is, I suspect, never easy. At least it hasn't been easy in the six years I've had one, and I don't see that changing any time soon. But there is no year, I'd contend, quite as challenging as the first. It's not just the actual caring for the child that's so difficult, either. Under normal circumstances you don't have to think about holding everything about your life together, but with a newborn it takes effort. This includes maintaining your relationship in the first year of parenthood, which can feel damn-near impossible when you're surviving on a minimal amount of sleep and under a maximum amount of stress.

According to a survey conducted by Plum Organics as part of their Keeping It Together campaign, 70 percent of millennial parents feel feel guilty when they're away from their child for a night out with their partner. Perhaps, as a result, 41 percent of new parents can't remember the last time they had quality time together without their children. Yet most of us would consider maintaining a healthy and engaged relationship is important. (Indeed, 88 percent of survey respondents indicated that a good sex life made for good family life.)

Esther Perel, who served as a consultant on the campaign, would agree. Emphatically.

Perel is an internationally renowned psychotherapist specializing in sex and relationships. Her books include Mating in Captivity and The State of Affairs: Rethinking Infidelity and have been translated into 24 languages. Her podcast, Where Should We Begin, is in its second season and is available on Audible. Romper was able to speak with her about maintaining a strong relationship in your baby's first year, because keeping it together while raising a tiny human is never, ever, innate.

A mother of two herself, Perel is under no illusion that anything other than mutual survival can be difficult. "The first few months you're in a haze," she admits. "It is what it is." She describes adjusting to parenthood as a "redistribution of resources" which, obviously, is challenging to figure out even under the best of circumstances, nevermind sleep deprived, physically recovering, and hormonally compromised. I mean, how? How on Earth are we supposed to find time to focus on ourselves and each other when we're so focused on our infants?

When it comes to "intimacy," that can take a lot of different forms, especially if your body is still recovering from birth.

I remember one particularly challenging night after the birth of my son that, honestly, could have been any number of nights. It was about two in the morning and I was breastfeeding... again. Sitting on the living room couch, it suddenly struck me how quickly this sleepless and physically demanding routine — a routine that had put all of my needs on the back burner — had become normal and accepted. I was on autopilot, but the engines were sputtering and it felt as though we could all crash at any moment. In moments of mutual survival, the idea of taking "time for myself" or "time for my relationship" was pretty laughable. Oh yeah? I need a date night, you say? Sure. We'll go to the moon! A restaurant seems just as distant at this point, so if we're going to dream, dream big.

But while Perel urges for immersive date nights every once and a while (she specifically used the words "no curfew," which sounds amazing), she says "the beauty of the first year is that a little goes a long way." Date nights don't have to be every week or even every month. When it comes to "intimacy," that can take a lot of different forms, especially if your body is still recovering from birth. Something as simple as taking a bath together can help to recharge your batteries. But what, you may ask, of the dreaded "mommy guilt"? Shut that down, Perel says. "You need to give yourself permission, and you need social reinforcement and internal reinforcement, to take time for yourself."

When you do finally make time to step out, don't fall into that all-too-common trap of using this as "baby talk" time away from baby. "Don't just talk about the baby," Perel says. "Talk about how you are. ... Somebody has to see you as a person."

Another theme Perel discusses in maintaining a healthy relationship after having a baby was vocal gratitude. According to the aforementioned Plum Organics survey, three out of four parents are keeping score when it comes to the amount of parenting related tasks they are completing versus their partner. From personal experience and observing my parent friends, that's a hard yes. Again, we're talking survival mode. If you feel as though you're not being recognized for just how hard you're working to make sure everyone makes it through, it's easy to start keeping tabs and getting grumpy with one another. "If you feel as though what you are doing is not being seen, you each feel you have to stand their with your flags bickering," Perel said. When that happens, she suggests cracking a joke. "You can say something like 'Hey. Do you think we're going to survive this?' Find a way to admit 'this is hard, but we're in it together.'" Even a disagreement can turn into an opportunity for gratitude. "If one person says 'Let's do X,' and the other says no," Perel says, "[the second person] can say 'But thank you for reminding me that's still important and making sure that doesn't disappear.'"

Magicians wow audiences by cutting their lovely assistants in half or making them disappear. As a parent, and as a couple, the magic trick is remaining where you are and in one piece. But, Perel warns, just because it's hard doesn't mean it shouldn't be a priority. Ultimately, investing in your relationship is investing in your parenthood as well. "Your life doesn't just belong to you anymore and neither does your relationship," she tells Romper. "Someone else is feeding off the same system and depends on it."

Some days, especially in the first year, putting your partnership front and center the last thing you are interested in. "Don't do it because you want to," Perel says. "Do it because it's important."