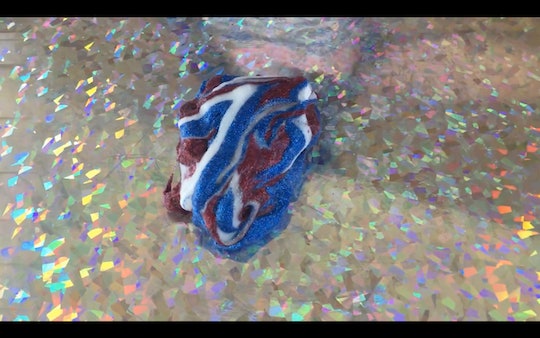 How To Make 4th Of July Slime

Your kids have been out of school for the summer for awhile now, but some years it just doesn't feel like summer until the 4th of July. With the holiday fast-approaching, you may have started to think about how you're going to spend the day. Will you take a trip to the beach? Throw a cookout with some patriotic treats? Make a craft that utilizes red, white, and blue? If arts and crafts are in your future, you need to know how to make 4th of July slime.

As you likely know, DIY slime is all the rage among kids right now. It's a good summer project to undertake while the kids are at home, because not only is it a fun way to entertain the kids for a few hours, but it's also educational. Not only that, but if you have kiddos that need a little extra sensory help, red, white, and blue slime — especially if it's also studded with beads, sequins, or water beads — might be just the thing. Whatever the reason to make slime in the summer, a red, white, and blue version is festive and fun.

Slime that celebrates the 4th of July is a bit more involved than regular slime. There are, essentially, two directions you could choose to go when making red, white, and blue slime. One way of making it is to divide the glue or other ingredients for one batch of slime into three separate containers and then add the colorings and ingredients that make the mixture gel and turn into slime. Another is to mix up three separate, entire batches of slime: one red, one white, and one blue. If you aren't opposed to having a lot of slime on hand, you might find it easier to mix up three individual batches because there's less thinking involved, which, when working with kids, can sometimes be a help.

Now that that's settled, you need to determine what kind of glue you're going to use to make your slime. According to blog Little Bins for Little Hands, for the blue and red slimes, try to use clear craft glue, which will help those colors pop. For the white slime, regular old white craft glue is best because that's the color you're hoping it'll stay anyway. The intensity of the color will depend on how much dye you use, so add what you think is required to get the color right. Simple Play Ideas recommended adding glitter to your slime for an even more festive touch — it resembles fireworks or sparklers, which are definitely 4th of July appropriate.

Use whatever slime recipe is your personal favorite. Some people stay far away from Borax, glue, or other slime ingredients and the options for substitutions are seemingly endless. There's no one "right" recipe for 4th of July slime, so find the recipe that contains ingredients with which you're comfortable and use that one to make your slime so you don't have to worry too much. Add whatever fun confetti or other celebratory mix-ins into your slime that you'd like and get ready for a fun and festive 4th of July that just might be a little bit educational, as well.