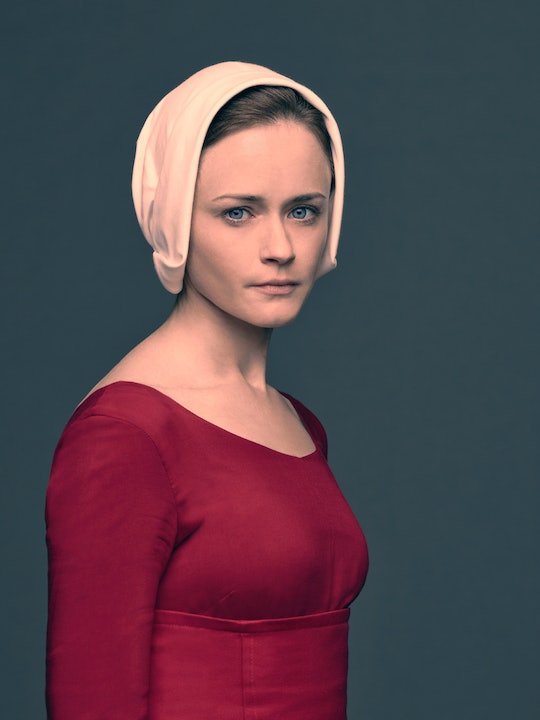 This "Handmaid's Tale" Costume Makes The Perfect Statement This Halloween

After Donald Trump won the election last November, many women began to anticipate restrictions and rollbacks on women's health rights. What perfect timing, then, for the Hulu Original show The Handmaid's Tale to premier this past spring. It certainly felt like a frighteningly well-time dystopian warning sign for the U.S.A. And this Halloween, a DIY Handmaid's Tale costume would be the perfect way to make a cultural statement that won't cost you a fortune.

The Handmaid's Tale is based on Margaret Atwood's popular novel of the same name. It tells the story of Offred, who is a "handmaid," or a woman held hostage by wealthy families, raped by the powerful husbands and forced to bear their children in a futuristic United States where most of the women are infertile. It's graphic, but it's the kind of critical art that could help prevent the restriction of women's rights to the point that they become nothing more than the wombs they were born with.

During his candidacy, Trump supported the idea that women should have to go to another state to get an abortion if the procedure becomes illegal in their home state; and, in the past, he's made derogatory remarks about breastfeeding mothers women and women in general. The president's comments are a direct attack on who women are and the lives they lead — his advocacy that we restrict abortion rights will endanger women's health and economic security. Trump has made the personal political for many women, and that's the statement a a Handmaid's Tale costume makes. Many people don't have the luxury of separating any part of their existence from Trump — even on Halloween.

If you're feeling like taking a stand with this costume, you're going to need three basic things to bring the look into life: a red dress, a robe/cloak, and the infamous bonnet. There are so many variations of this that it can make your head spin. But a frugal approach is actually quite simple. Here's a DIY Handmaid's Tale costume that won't break the bank.