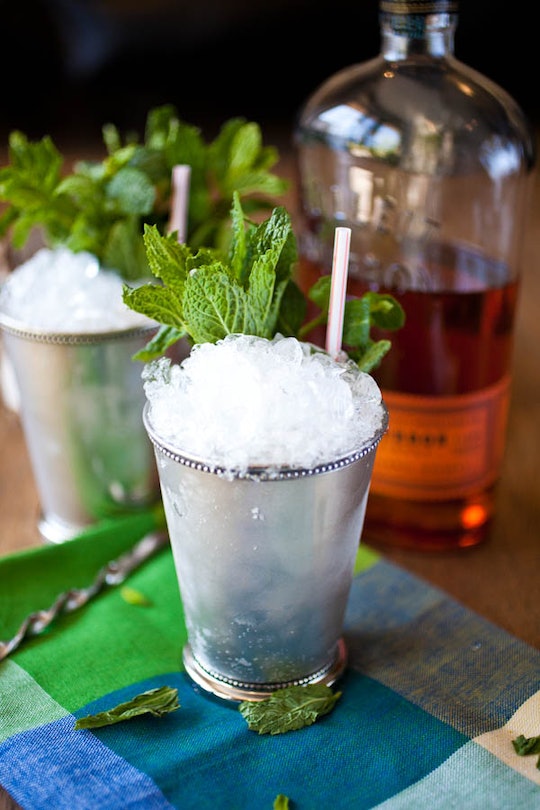 Courtesy of The Crepes of Wrath

How To Make A Mint Julep, Because Your Kentucky Derby Is Incomplete Without It

Whenever you hear about a mint julep, you probably imagine southern elegance, giant fashion hats, and the Kentucky Derby. Understandable, but the mint julep is a delightfully refreshing cocktail and should be enjoyed all spring and summer long, even if you're not betting on a horse. You don't have to be a true southerner to learn how to make a mint julep either, but if you are any kind of cocktail shaker (cue Tom Cruise in Cocktail, obviously), then the recipe needs to be in your repertoire.

Why? Because it's a mint julep for crying out loud. If you've never had one, you're seriously missing out on a delightfully sweet and crisp cocktail. Made with bourbon, simple syrup, and mint, it's also a fairly easy drink to whip up. According to PBS, when it's time for the Kentucky Derby, there are around 120,000 mint juleps served to those watching the race. Y'all (I can let my southern side show when I'm talking about mint juleps), that's a lot of mint.

The drink has been around forever and was once called 'the dream of drinks' according to The Atlantic, which just gives you even more reason to whip up a batch any chance you can get. But while the ingredients may sound simple enough, the mint julep deserves to be treated as a complex recipe. Don't serve it in a red solo cup -- it needs its traditional silver or pewter cup, and you need to follow the mint julep recipe from The Crepes of Wrath.

Trust me, this isn't a recipe you can just wing. It takes the right amount of all the ingredients to make it so thirst-quenching and lovely. In The Crepes of Wrath's mint julep recipe, you not only make your own simple syrup, but you get directions on how to properly muddle the leaves for the ultimate mint taste and the importance of crushed ice in the cocktail is outlined.

Look, I'm not saying a mint julep will change your life, but it will change your summer cocktail menu. You can feel super fancy sipping on one of these, not to mention you can finally use your favorite bourbon for something other than a way to make Coke alcoholic. Make them for brunch, make them for dinner, make them when it's a hot Sunday afternoon and you need to slip off to paradise. It's an easy cocktail to make in a large pitcher, too, so be prepared to show off your southern drink skills to all of your friends. A giant hat isn't required, but I'll always approve of donning one in the name of a mint julep.