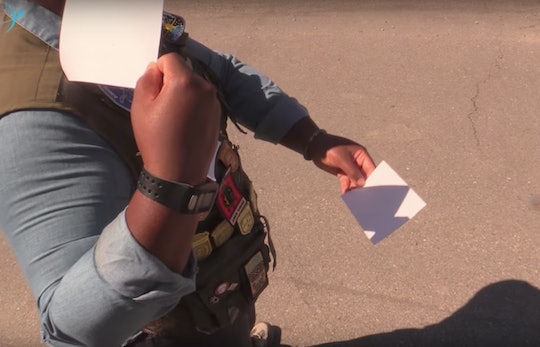 How To Make A Pinhole Projector For Kids, Because The Solar Eclipse Is Worth Watching

On Aug. 21, a total solar eclipse will darken skies across the nation. This year's total solar eclipse, the first viewable in the U.S. since 1979, will cover a path about 70 miles wide spanning from Oregon to South Carolina. It's supposed to be a remarkable sight, one said to even bring people to tears, but safety is paramount when considering anything having to do with looking directly at the sun. So you and your family will want to know how to make a pinhole projector for kids. It's an easy (I promise), inexpensive project, and will make it so you can all enjoy the eclipse without any worry of potential eye damage.

You don't necessarily need to have special glasses or equipment to watch the eclipse, though many prefer those. According to The Jet Propulsion Laboratory at NASA, a homemade pinhole projector (also called a pinhole camera) is a good way to watch the eclipse safely and easily from anywhere. (Although it's worth mentioning that you have to choose some form of safety for watching the solar eclipse. If you're not creating a pinhole projector, you will need solar eclipse glasses.)

A pinhole projector, according to AccuWeather, is one of many ways to view a solar eclipse indirectly, meaning that spectators can still see the eclipse without looking at the sun. There are a few different types of pinhole projectors, but the simplest one only requires two pieces of paper and a pin or thumbtack.

All you have to do is use the pin or tack to poke a hole in the center of one of the pieces of paper.

Then, you place the second piece of paper on the ground, and hold the first (the pin-holed paper) in a way that casts a shadow on the paper on the ground. In the center of the shadow, there should be a circle of light made by the hole; on a typical day, the sunlight shining through the hole will appear as a circle, but during the eclipse, it'll be a crescent reflecting the current phase of the solar eclipse, noted The Planetary Society tutorial.

As Seattle Public Library suggested, you can make the image of the sun larger by just moving the paper with the hole further away from the paper on the ground.

There's plenty of variations on these homemade projectors, with materials ranging from foil to paper plates to cereal boxes. Try a few out and see what you like, and make sure you test out your projector ahead of time.

And, since these aren't the most study pieces of equipment, it wouldn't hurt to keep your projector out of the reach of grubby toddler hands until Aug. 21. (Or just keep a few extra pieces of paper handy).