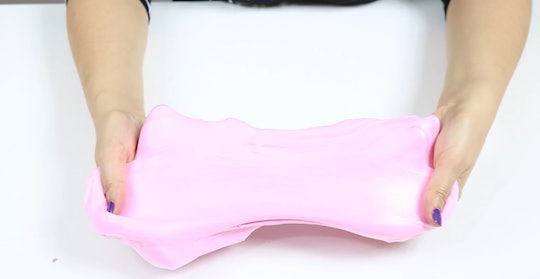 How To Make Safe, Homemade Slime

There are a lot of DIY, at-home science experiments that can be done with kids that aren't just educational, but also a fun. Although few people would argue that cooking and baking with little ones is easy, it is the easiest way to demonstrate science. Making homemade slime, for example, is a classic experiment that excites kids. That being said, science experiments can sometimes be a little bit dangerous for kids who don't necessarily know all of the requisite safety precautions that need to be taken, so it's important to know how to make safe homemade slime, so your science lesson doesn't end in disaster.

Traditionally (can you call a homemade slime recipe traditional?), homemade slime is made by mixing Borax with liquid glue, food coloring, and water. However, after an 11-year-old in Massachusetts suffered third degree burns from her homemade slime, parents have begun to question its safety as well as seek out recipes that might be a bit safer. Doctors told the Massachusetts family that the burns were due to the addition of Borax, according to People. Many doctors, however, such as Dr. Vanessa Stoloff, a family practitioner at the University of Pennsylvania, who told Parents that there shouldn't be enough Borax added to slime recipes to get absorbed through the skin, say that the aforementioned traditional recipe is safe as long as kids aren't ingesting the slime they make. There are stories beyond the most recent one, however, of kids burning themselves after handling Borax, especially if they have sensitive skin.

The good news is there are also many ways to make homemade slime that leaves the Borax on the shelf in favor of, perhaps, more benign ingredients like cornstarch. So even if your kiddo has sensitive skin, they don't have to miss out on all of the slime-making fun. Here are just a few ways to make safe slime from the comfort of your own kitchen — no lab required.