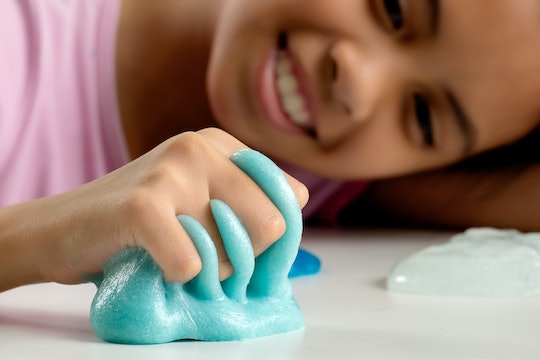 How To Make Slime Without Detergent

It's no secret that kids love all things gooey, mushy, and slimey. You simply can't keep them away from it. That's why it's no surprise that DIY slime has been making a comeback. Unfortunately, the booming trend can also be dangerous on their skin. Chemicals found in some detergents that are used to make slime can make the DIY creations not so kid-safe. But you hate to take away your child's fun, which is why you may be interested in learning how to make slime without detergent. After all, your kids aren't going to give up the trend easily.

To guarantee your kids' safety and to put your mind at ease, Elmer's has created a worry-free glitter slime recipe for your family to enjoy. The slime recipe only requires baking soda, contact lens solution, and Elmer's Glitter Glue — all of which are probably conveniently located in your house, just like the laundry detergent was. Using this Elmer's recipe means no harsh chemicals, and no stress for mom. Sounds like a win-win to me.

But there are even alternates to Elmer's alternate slime-making recipe. BBC suggests moms and kids to use cornflour, water, and optional food dye for safe slime.

Laundry detergent loaded with Borax, can unfortunately harm your kid's hands as they form their own slime creations. People reported that the combination of glue, water, and borax, caused an 11-year-old girl to suffer third-degree burns to her hands after making homemade slime. Doctors have even warned against the use of borax when creating slime. When it comes down to it, chemicals just shouldn't be used for toys.

In an interview with NBC4, pediatrician Dr. Richard Ulski further stressed just how unsafe slime can be for kids. "From a medical standpoint too much of Borax can lead to medical problems including things like seizures," Ulski said. Well, that's definitely more of a situation than any parent would expect to sign up for when allowing their kids to make slime. So, moms beware.

It's important to try to avoid using harsh chemicals when making slime to prevent your kids from getting hurt. And, luckily, with some safe slime recipes, that's easy to do.