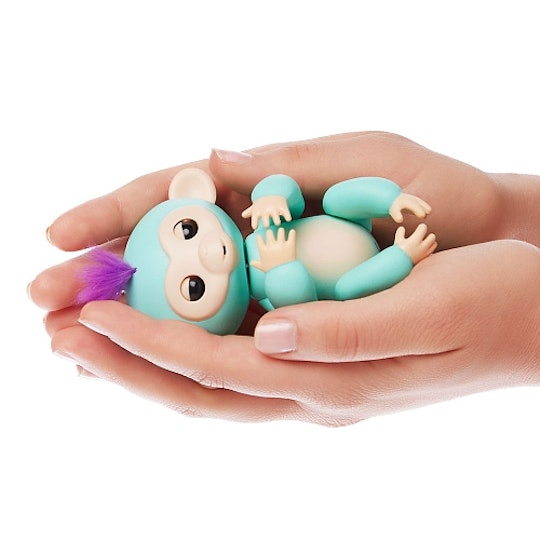 All The Ways You & Your Kids Can Play With Fingerlings

There's something vaguely familiar to me about Fingerlings, the latest toy craze expected to take the holidays by storm this year. Because Hatchimals are so 2016. These little interactive robotic monkeys that cling to your fingers are the first of their kind, of course. But, personally, they remind me of Gizmo, the adorable creature that narrowly avoided being turned into a disgusting Gremlin in the 1984 movie Gremlins. Perhaps it's the adorable monkey babble? Or maybe it's the very specific rules children must follow to play with their Fingerlings. Either way, I obviously want one — and more importantly, so will your kids.

Fingerlings from Wow Wee Toys are being billed as the "toy that never wants to let you go," according to the company's website. And while that might seem like a rather ominous prospect the toys are genuinely adorable. They interact with your child — Fingerlings come with batteries already installed as a beautiful added bonus — and respond to touch, noise, and affection.

There are six original Fingerlings sold in different colors named Sophie, Bella, Boris, Zoe, Finn, and Mia, and more Fingerlings are being added all of the time. Like the much sought-after unicorn Fingerling Gigi, which had an early limited release through Toys "R" Us, just long enough to make kids lose their minds before becoming impossible to find.

If you manage to get your hands on one of these hot new Fingerlings, be prepared to do a little reconnaissance work before trying to just, you know, jump on in and play with them. Here are some of the ways you can play with them:

You Can Make Them Fart

Obviously the first thing your child is going to want to do is make their Fingerling fart. Bodily functions are endlessly funny for children ages 2 to forever, so making a robotic finger monkey fart is going to blow their minds.

How do you do it? Make sure your Fingerling is turned on (the switch is at the back of their heads) and tap its sensors on either side of their little tuft of hair to activate their response. Then simply cup their heads to make them toot. According to Wow Wee's website, they won't necessarily fart every time. So just keep trying, I guess!

You Can Make Them Blow Kisses

According to the website Toys, Tots, Pets, and More, Fingerlings are designed to respond to children with affection. So if your child blows it a kiss, it will blow one right back — or sneeze if the mood strikes them. Because the world doesn't run on farts alone, you know.

You Can Make Them Giggle & Burp, Too

If you hang Fingerlings by their tail, they're bound to laugh hysterically. Or burp (if you cup their head in both hands while they're upside down). Either way, your kid is bound to love it. They respond differently depending on their position, so if they're upside down they will make completely new sounds for your kids.

You Can Attach Them To *Almost* Anything

Fingerlings are designed to grip "your finger, the side of your notebook, your straw, or even your highlighter," according to the company's website. They can attach to almost anything their can curl their little monkey feet and hands around.

You Can Make Them Sing

The Fingerlings respond to clapping with different monkey-type noises — they make over 40 unique sounds — but if you happen to have all of the original six Fingerlings, then clapping gets them singing a special little song.

Finally, You Can Rock Them To Sleep

Kids can actually rock Fingerlings to sleep in their hands, offering them the opportunity to nurture their new pet/toy and also hear all of their super cute falling asleep sounds.

This is perhaps the hallmark feature of Fingerlings. The toys encourage kids to take care of something smaller than them, something sweet and cute and defenseless. Because we wouldn't want them turning into Gremlins now, would we?

More Like This
Sarah Michelle Gellar Is Facing A Terrifying Parenting Milestone: Sleep Away Camp
13 Going on 30 Is Just As Sweet & Funny As You Remember — And Kids Will Love It Too
Reddit Is Not Impressed With Dad Who Hid Neighbor's Gnome Because It Scared His Kid
You’ve Probably Been Pronouncing “Lilibet” All Wrong