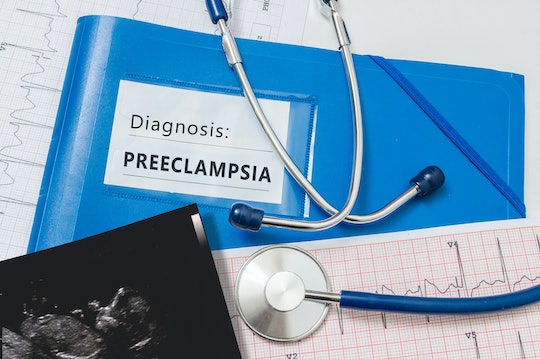 How To Prevent Preeclampsia — 5 Ways To Keep Your Chances Low

I was a model patient when pregnant with my daughter. I never had any complications, I maintained a relatively low weight gain, and I felt great. Until I hit about 36 weeks. All of a sudden, I was swollen from head to toe, I gained 50 lbs, and my blood pressure skyrocketed. After finding the protein spilling into my urine, I was diagnosed with preeclampsia. I was totally shocked and tried to figure out if I could have learned how to prevent preeclampsia.

I wasn't alone though. According to the American Pregnancy Association, preeclampsia affects at least 5 to 8 percent of pregnancies. It can be dangerous during pregnancy, especially if left undiagnosed, and the only cure for preeclampsia is delivery. The Preeclampsia Foundation notes that most women deliver a healthy baby and recover fully, but it's still not necessarily something you want to deal with during your pregnancy. Because preeclampsia affects the arteries carrying blood to the placenta, your baby may receive less oxygen and have a lower birth weight, according to the Mayo Clinic. In fact, preeclampsia is to blame for up to 20 percent of the 13 million preterm births each year. Those diagnosed with preeclampsia are also at an increased risk for placental abruption, HELLP syndrome, eclampsia (which is preeclampsia, but accompanied with seizures), and cardiovascular disease.

So was there anything I could have done to prevent being diagnosed with preeclampsia? The American Pregnancy Association notes that currently, there is no sure way to prevent preeclampsia. There are too many contributing factors to high blood pressure and while eliminating some seems to help, not all of them can be controlled. But there are a few things doctors and researchers recommend to try and lower your risk of being diagnosed with preeclampsia. While nothing is guaranteed, you can follow these five guidelines if you want to keep your chances as low as possible.