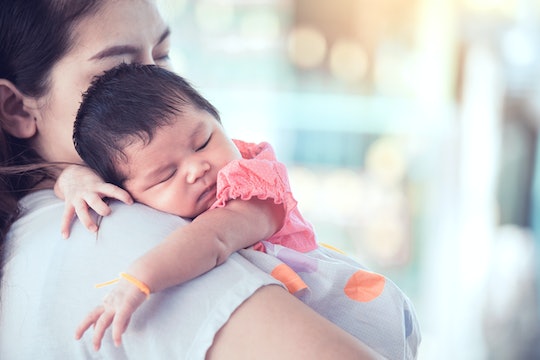 If A Baby Can't Receive The MMR Vaccine, Here's How To Protect Them From The Measles

My niece is currently pregnant with her first son. With a due date in September, there is uncertainty of whether or not the current measles outbreak will be over before then. If it's not, knowing how to protect an unvaccinated baby from the measles will be at the top of her to-do list since her newborn son won't be able to receive his MMR vaccine until he is 12 months old.

Not all unvaccinated children are unvaccinated by parental choice. Some children simply are not old enough to receive the vaccine, and some are too young to have received two doses. Which means this question is on a lot of parents' minds.

According to the American Academy of Pediatrics, the first dose of the MMR vaccine to protect children from the measles should be administered between ages 12 to 15 months, with a follow-up dose occurring between ages 4 and 6 years old. "High immunization rates in a community will protect those who cannot be vaccinated, including infants under 12 months of age. These infants are at the highest risk of serious illness, hospitalization, and death due to measles," their website states.

So, if parents adhere to those recommended guidelines (which are the same for the Center for Disease Control and Prevention and American Academy of Family Physicians) in theory, herd immunity will protect infants not old enough to receive a vaccination. The problem occurs when parents refuse to vaccinate their children and expose unvaccinated babies to the potentially deadly disease.

Jillian Ginn Stewart, a first-time expectant mom in Texas, says that she and her husband selected a pediatrician for their future daughter with the measles outbreak in mind in order to protect her from exposure until she is old enough to receive their first MMR vaccine. "The pediatrician that we have chosen does not accept patients that are not willing to be vaccinated and we chose the pediatrician for that exact reason," she tells Romper.

According to the CDC, 28 percent of children under age 5 who contract measles will need to be hospitalized. Unfortunately, the severity of the disease and the current rates of infection (704 cases in 2019 so far, reported by the CDC) have caused a need for an increased vigilance for parents of unvaccinated children — specifically those with babies who are not old enough to be vaccinated. But, there are some steps that concerned parents can take in order to protect their babies from exposure.

The first quick tip — wash your hands. This one might sound like a no-brainer, but it is oh so important in preventing the spread of germs that can lead to infection, according to the pediatricians at Healthychildren.org. According to the CDC, measles can live for up to two hours on surfaces, so even if you aren't in direct contact with an infected person, you may still encounter contaminated surfaces unknowingly.

Natasha Burgert, MD, FAAP, a pediatrician practicing in Kansas City, says parents can work to protect their children from measles by being aware of who is around your baby. "Make sure that everyone else around the baby has had an MMR vaccine. If a parent or caregiver is not sure, it is not harmful to get an 'extra' MMR. Talk to your adult healthcare provider to ensure the series is complete," she tells Romper. "Steer clear of areas with known cases. This could be easier said than done since those with measles are spreading it before they develop symptoms. However, the increased risk is inherent in areas with active cases."

Dr. Burgert says that concerned parents can also talk to their child's pediatrician about vaccinating early. "If traveling to an area with an outbreak or living within an area with active cases, infants may get the MMR vaccine early. Children must be at least 6 months of age to get the MMR, so talk with your child's doctor for more information," she says.

She also recommends that parents stay up-to-date with the latest information regarding vaccine protection by visiting Healthychildren.org or Chop.edu/vaccine, both reliable sources for information about the current measles outbreak.