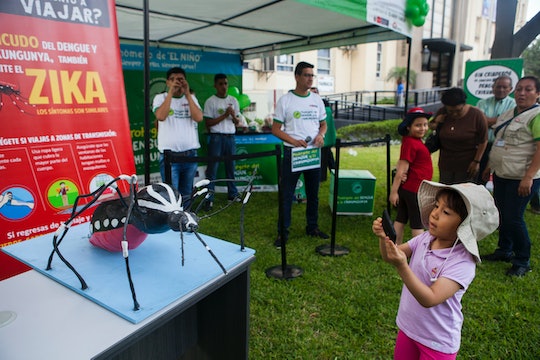 How To Protect Your Toddler From Zika? It Poses A Threat Even Outside Of Pregnancy

Scientists have learned a lot about the Zika virus over the last 18 months. It is now known that there is a direct link between the virus and microcephaly — a birth defect that causes babies to be born with abnormally small heads. Pregnant women have been warned to avoid Zika-affected areas, and everyone has been advised to wear insect repellant. However, it now appears Zika may be doing more than just making otherwise healthy adults sick. In fact, the virus appears to be targeting the brain, making Zika far more dangerous and detrimental than scientists once believed. So how can you protect your toddler from Zika, and why should young children be protected?

Late last month, NBC News reported information no one wanted to hear: several recent studies have shown Zika can target and damage both brain cells and nerve cells. In fact, according to the American Academy of Neurology, four more patients have developed Guillain-Barre syndrome (GBS), as a direct result of Zika. (GBS is a paralyzing condition caused by nerve damage.) And doctors in Brazil suspect Zika is responsible for cases of acute disseminated encephalomyelitis (ADEM), a temporary disorder that mimics multiple sclerosis and damages the brain and the spinal cord. Of course, this news is worrisome for everyone; however, it is particularly troublesome for our children, whose brains and bodies are still developing. And the bad news gets worse because there is no definitive way to prevent Zika; there is no vaccine and the only way to prevent Zika is to avoid mosquito bites.

However, the Centers for Disease Control and Prevention has some Zika prevention advice. In fact, the CDC suggests parents protect their children in the same way they would protect themselves:

As for what else you can do: whenever possible, adults and their children should avoid traveling to places where Zika is an active and ongoing problem.