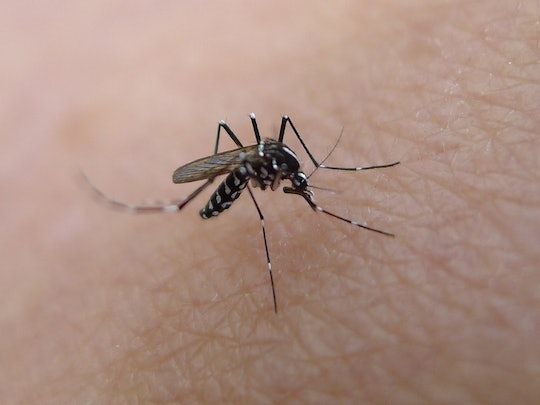 How To Protect Yourself From Zika Virus, Because There Are Cases In The U.S.

Few things worry a pregnant woman more than the possibility of harm to her unborn child. So, as news that an untreatable tropical illness closely linked to significant birth defects in newborns is spreading in Central America, South America, and parts of the Caribbean, many people are wondering how to protect yourself against the Zika virus. The good news is that the Centers for Disease Control (CDC) website includes advice from federal health officials on steps to guard against Zika infection, as well as clear guidelines for doctors treating pregnant women feeling ill after possible exposure. And that information is important, because as the temperature rises and mosquitos become more active, federal health officials warned that American officials may see a rise in Zika cases.

The Zika virus is common in Africa and parts of Asia, according to the New York Times, and in some countries residents have actually developed an immunity. However, over the past several months, the disease spread to Brazil where it infected between 440,000 and 1.3 million people, according to CBS News. There is no vaccine for the Zika virus, and while the disease itself poses little health risk, it has been linked to a rising number severe brain development issues and health problems in newborns whose mothers had the virus.

Here are the easiest ways pregnant women can protect themselves from the Zika virus.

Postpone Travel To Countries Where Zika Is Spreading

If You Must Travel, Protect Yourself Against Mosquitos

If pregnant women must travel to a country where the virus has been detected, the next critical step is to avoid mosquito bites, the New York Times reported. The CDC urged travelers to take extra precautions against infection, including using insect repellant with DEET, picaridin, or another form of long-lasting protection, according to the CDC website. Officials also recommended wearing long-sleeved shirts, long pants, and keeping mosquitoes outside by using air conditioning, screens, and mosquito nets over sleeping areas.

If You’re Diagnosed With Zika, Protect Others From Getting Sick

Health experts said the Zika virus can’t be transmitted from person to person and the disease poses little risk to anyone not expecting a baby. According to the CDC website, Zika causes a mild illness that seldom requires hospitalization and only rarely proves fatal. The rash, fever, and joint pain that one in five Zika patients experience only lasts around seven days, according to the CDC website.

But patients infected with Zika should take extra steps to make sure the virus doesn’t spread to others. During the first week of infection, the disease is present in blood and can be passed to others via mosquito bites. So, the CDC recommended that people who are infected or suspect exposure to Zika avoid mosquito bites by using insect repellent, wearing long sleeves/pants, and using air conditioning and screens to keep mosquitoes outside the home.

Even If You Live In The U.S., Protect Yourself From Mosquito Bites

Experts believe that more cases are likely, according to CBS News, given that as many as 80 percent of infected patients will show no symptoms and the relatively narrow window for reliable detection. Dr. Peter Hotez, dean of the National School of Tropical Medicine at Baylor College of Medicine in Houston, told CBS News that American pregnant women should still take precautions to avoid mosquito bites:

The mosquitoes are here. They're certainly not as abundant in the winter months as they are in the spring, but there are probably a fair number of people here who have visited the Caribbean or Latin America who are already infected with Zika virus. Our mosquitoes are going to bite those individuals, pick up the virus, and transmit it to another person.

For now, women who are worried about Zika infection this summer should plan to use plenty of bug spray and take extra precautions to avoid mosquito bites. And whether she’s feeling ill, it’s a good idea for any woman who’s traveled to a high-risk area to consult a doctor to discuss risks and any screenings that might prove beneficial.

As if pregnancy didn’t come with enough worries. (Sigh.)

More Like This
Are You There God? It’s Me, Margaret Is Finally Heading To The Big Screen
MGK Shared An Emotional Tweet After Dedicating Song To “Wife” & “Unborn Child”
13 Moving Photos Of Kids, Families, & More Protesting Abortion Rights Across The Country
Everything We Know About 'Virgin River' Season 4 Right Now