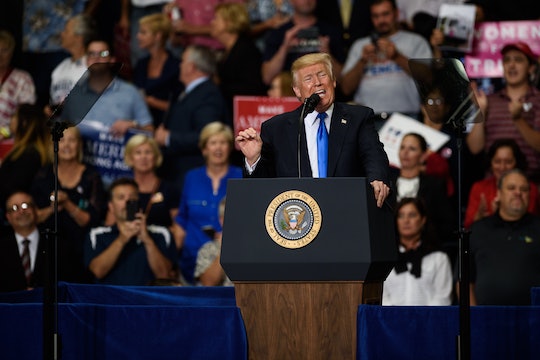 How To Protest Trump's Ban On Trans People In The Military

On Wednesday morning, President Donald Trump announced over Twitter that transgender people will be prohibited from serving in the United States military. Outraged by the discriminatory policy change? Here's how to protest Trump's ban on trans people in the military.

In three tweets, Trump reversed the Obama administration's policy allowing transgender people to serve openly in the military, as well as receive medically-necessary care. The president alleged that he made the decision, which bars trans people from serving "in any capacity," because the "military must be focused on decisive and overwhelming victory." Therefore, Trump tweeted, the federal government could not be bothered with costs associated with thousands upon thousands of transgender military personnel.

Trump's assertion that transgender people serving in the U.S. armed forces would be a cost "burden" is based on discredited information. According to Refinery29, a study published by the RAND Corporation, a research nonprofit, found that gender-affirming care would only increase health care costs by about 0.04 percent, to 0.13 percent annually.

The Department of Defense has yet to release a guidance in regard to Trump's ban. Officials with the department, however, referred all questions to the White House, according to BuzzFeed. Naval Capt. Jeff Davis, spokesperson for the defense department, said in a statement,

We will continue to work closely with the White House to address the new guidance provided by the Commander-in-Chief on transgender individuals serving the military. We will provide revised guidance to the Department in the near future.

If you want to protest Trump's policy change reversal and are not sure where to start, here is a cheat sheet.

Not sure which congressperson to call or email? Visit the U.S. House of Representatives website and enter your zip code to find out. If you're looking for your senator, head to U.S. State Senate website and choose your state. Both websites will pull up your elected official's name and contact information.

You can also identify your local lawmakers by visiting 5 Calls. Enter your location, then choose the active issue you want to protest; for this topic, you would click on "Denounce Trump's Ban on Transgender Troops." You will be redirected to a page that has a summary, names, and numbers for your elected officials, and a detailed script. You will, however, be prompted to enter the results of your call in order to get information on other lawmakers in your state to call.

Here's a sample script from 5 Calls that can be used for phone or email:

I'm [CALLING/EMAILING] to ask [NAME OF REPRESENTATIVE OR SENATOR] to denounce Donald Trump's recent Twitter announcement that the US military will no longer allow transgender troops to serve. Transgender Americans should have the right to serve their country while receiving the gender confirmation therapy they need. It is unacceptable for Trump to strip them of these rights in a series of tweets.

Donate Your Time Or Money To Transgender Rights Groups

If you want to donate money or volunteer your time, reach out to one of the many transgender rights groups working to protect transgender and gender non-conforming people in the United States. Transgender legal and advocacy groups will need as many resources as they can in order to fight against Trump's reinstatement of the ban. You can find a list of organizations on GLAAD's website, but some to consider include:

In addition to donating directly to trans groups, you could also volunteer with or give money to broader human rights organizations such as the American Civil Liberties Union, Human Rights Watch, or the National LGBTQ Task Force.

If you can, donate your time and money. Both are needed more than ever.

Whether it's in the streets or online, protesting is an effective way of showing dissent. You can find protests to attend by scouring social media sites like Twitter, Facebook, and Tumblr. You could also sign up for RESISTable, a newsletter founded by writer Marisa Kabas that gathers information on upcoming protests around the country.

But protesting in the streets is not the only way of voicing your outrage. Writing blog posts, sharing news, forming online social justice groups, having community video chats, and some other internet-based protest actions can really make a difference in raising awareness and affecting change. Virtual marches are also an important way to be inclusive of activists with disability who are often shut out from protests that tend to be inherently ableist.

Trump's unprecedented decision to reverse the Obama administration's policy will hurt thousands of transgender service members who are protecting the very country the president claims to love. His move is a discriminatory action that puts so many lives at risk. Whether this ban will stand is not certain, but in the meantime, don't let your elected officials forget the harm that has been done.