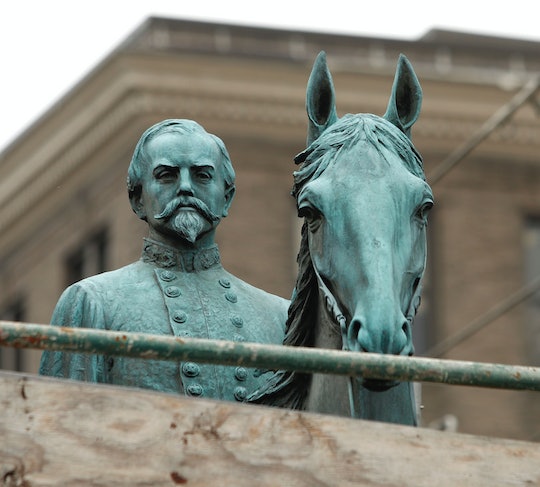 How To Protest Your State's Confederate Monuments

It's been a dark and frightening four days since Saturday's neo-Nazi violence in Charlottesville, Virginia, where 32-year-old Heather Heyer was murdered, allegedly by a white supremacist. America has been plunged into a national debate about racism, white nationalism, and fascism — topics about which there should be no debate and only swift condemnation, a fact entirely lost on President Trump. Saturday's violence stemmed from a white supremacist rally at a Confederate monument to Gen. Robert E. Lee. Here's how to protest your state's Confederate monuments, because it's long overdue for these symbols of racist "pride" to come down.

According to the Southern Poverty Law Center, there are 718 Confederate monuments in the United States, many of them erected during the civil rights era. While the largest concentration of these Confederate monuments are found in Georgia, North Carolina, and Virginia, they can be found in 32 states and Washington, D.C. — and a bizarre Confederate enclave in Brazil. While some cities have taken matters into their own hands, such as Baltimore, Maryland, removing its Confederate monuments overnight Tuesday, there are still entirely too many others across the country that remain in place. If you have a Confederate monument near you, here is a quick overview of the do's and don'ts of protesting their existence.

While your right to protest is protected by the First Amendment, individual city ordinances may require permits for organized protests to occur, even within public spaces. This isn't a fight about bureaucracy, and you shouldn't have to need a permit to protest, but laws are laws: If you need a permit to organize a protest, it's better to have it than not. Do your due diligence.

Do Know Your Rights As A Protestor

First Amendment protections don't mean police aren't going to get involved. You can get arrested for protesting, and it's important to know your rights. The American Civil Liberties Union has a comprehensive guide to protesters' rights, and you can even buy "Know Your Rights" wallet cards from their website.

Don't Try To Take It Down Yourself

Do Trust Your Gut

As Charlottesville proved on Saturday, violence can happen quickly. Whenever you're involved in a public demonstration, situational awareness is essential. If it's clear that a protest is about to turn violent, get out of there post haste.

The bottom line is that these Confederate monuments need to go, but they're only going to start disappearing off the map if people make their voices heard. There is nothing more patriotic or American than our right to protest — just make sure you're smart and safe when you go out and resist.