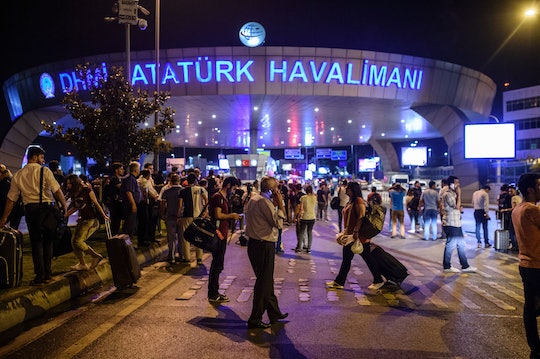 Whenever terror strikes, in any way, there's not a lot everyday people around the world can do to help. Although it sometimes might feel weird to simply post to social media in the wake of an attack, you probably want to know how to put the Turkish flag filter on your Facebook photo to show support for the victims of the Istanbul airport attack. Facebook hasn't released an official one just yet, but there are ways to get around that.

The first way, is to just make your Facebook profile picture an image of the Turkish flag, or to overlay a transparent filter on your main profile photo by yourself, using a service like Photoshop or Pixlr. The second way, which might even be more worthy if you're into the Facebook filters after every terrorist attack, is to just make your Facebook photo filter an "all flag" filter, because if you want to show support for every victim of terror, every time it happens, how can you choose? And you'd be updating it a few times a day.

Let's cut to the chase.

Because here is the thing: Tuesday's attack at the Ataturk airport in Istanbul was huge. There are at least 31 victims and counting and even more wounded. But this is just the most recent attack in Istanbul this month.

When attacks happen in certain places, like France or Belgium, Facebook is quick to make a filter to show support. Much like the Pride flag overlay, especially after Orlando, it it's easy to relate to those in your direct friend networks.

When it happens in Turkey, which by the way, supports the U.S. led coalition to fight ISIS and terrorist groups in Syria and Iraq and is therefore a target, there is less outcry on the social network. Or at least less outcry from users in North America and that's why it's possible you might not have even heard about the attack. Facebook algorithms are not perfect.

But terrorist attacks happen all the time, and everywhere. It's possible that instead of Turkish flag filters, there are posts from friends about the U.S. election and how America needs to fight ISIS and other terrorist groups. Turkey, in the past year alone, has suffered from multiple terrorist attacks like Tuesday's because they are diplomatically involved with America, too. There is nothing that sets an attack in a Turkish neighborhood or airport apart from an attack at a Belgian airport, or a French or Florida-based nightclub.

If you can't find a Turkish flag to overlay on your Facebook profile, it doesn't mean that the terror attack wasn't real.