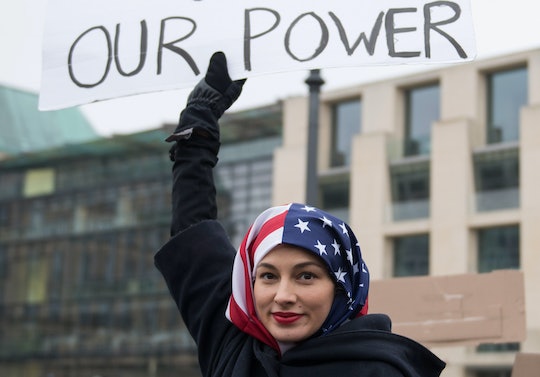 How To Raise An Intersectional Feminist

There are a lot of things I want to raise my daughter with: kindness, tolerance, empathy, feminism. But that last one isn't as simple as teaching her that women and men should be equal in all aspects. If you know how to raise your daughter with intersectional feminism, you're giving her more than just a heavy dose of girl power — you're combining that "who run the world" attitude with an understanding of diversity and inclusivity. And you know what? That's really the only type of feminism you should be focusing on.

So why the separate name? According to USA Today, intersectional feminism may be a hot buzz word, but it's been around for several decades. In the last few months, as women have marched to protest President Trump and his administration, the term has been in the spotlight, proving to women all over the world that it's not enough to say you're a feminist; you need to practice intersectional feminism to make a difference. It's arguing that instead of focusing on equal rights between sexes, you also focus on all of the other things that overlap women and their rights, like their sexual orientation, race, religion, ethnicity, and socioeconomic status.

I know; it sounds like a lot to put on one little girl. The thing is, it doesn't have to be. You're modeling feminism for your daughter every single day by being a total badass who fights for the same rights as your male counterparts and who believes in the power of women and women's equality. But to raise your daughter with intersectional feminism, you need to do more than just teach her that women like her should have the same rights as men. You need to teach her that all women, even the women whose issues don't represent your daughter's issues, are heard.

For example, a big issue for a lot of women is the gap in wages between men and women. It's obscene, it's 2017, and the country is better than this. But how do you read the statistics on equal pay? Did you know that, according to the Pew Research Center, black women experience a larger pay gap between their income and a white man's than a white woman does? Did you know that Hispanic women suffer the most, making only $12 to a white man's $21? When you're arguing that all women deserve equal pay, are you only spouting the numbers that pertain to you, or are you thinking of the women who are suffering even more?

Kimberlé Crenshaw, executive director of the African American Policy Forum and a professor of law at Columbia University and the University of California, Los Angeles, law schools, is the woman that coined the phrase intersectionality. In an article for The Washington Post, Crenshaw noted that while the phrase was originally intended with black women in mind, it's open to all people who are fighting more than just gender discrimination — people with disabilities, the LGBT community, transgender women, and women within immigration movements. It's about privilege, or lack thereof. It's about knowing that while a white woman may be discriminated against a job for being a woman, a black woman can be discriminated for both being a woman and for being black.

And it's about making sure white women understand these issues, even if they have no idea what it's like to be oppressed.

To raise your daughter with intersectional feminism, you have to teach her about her privilege. My daughter is white. That's her privilege. Although she will face obstacles as a woman, she won't face the same obstacles as that a Hispanic woman, black woman, transgender woman, Muslim woman, or woman with disabilities. She won't have overlapping reasons for someone to deny her equal rights; she'll have one — being a woman. And she'll never understand what it's like for her to be oppressed like her black female friends could be.

Nobody's saying the issues at the core of feminism, like equal pay and abortion access, are not important. But if you want to practice intersectional feminism and you want to raise your daughter with it, you also have to talk about the issues that don't affect you as a privileged woman. Things like having access to healthcare as a transgender woman, opposing police brutality against black women, and fighting the deportation of immigrant women.

You look out for everyone and you teach your daughter to realize that she has no right to ignore someone else's struggles or diminish their issues. Just because she doesn't experience it, doesn't mean it doesn't need her voice. In fact, privilege gives you a huge responsibility — you have to speak up and out. Teach your daughter to use her privilege to fight for all women, and you teach her intersectional feminism.