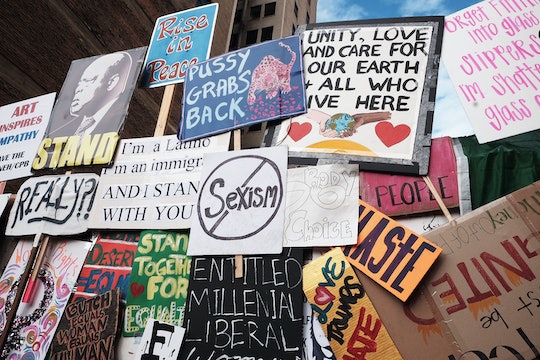 How To Resist On International Women's Day

The Women's March that took place after President Donald Trump's inauguration was one of the biggest single-day demonstrations in American history. If that march is any indication as to what will happen during International Women's Day on March 8, you can expect to see women and allies act together in equality and justice in very large numbers. Many people may want to be involved, and may be wondering how to resist on International Women's Day in solidarity. Thankfully, there are many ways to participate and show unity for everyone that wants to.

For starters, the organizers of the Women's March are planning "A Day Without A Woman" on the same day as International Women's Day. It's a day of strike and economic demonstration to show support for women and all gender-oppressed people. It's also a day to acknowledge the huge economic value and contributions of all women. As noted on the Women's March website, women contributing to society generally receive lower wages, are vulnerable to discrimination, sexual harassment, and job insecurity. Striking on that day calls attention to these important issues and sends a unified message. If you can't strike that day, there are also other things you can be doing to resist on that day, and every day moving forward.

Striking and protesting isn't always feasible for everyone that wants to participate, however, you can still be part of this day in many monumental ways. Here are 11 ways you can resist on International Women's Day, and every day of the year.