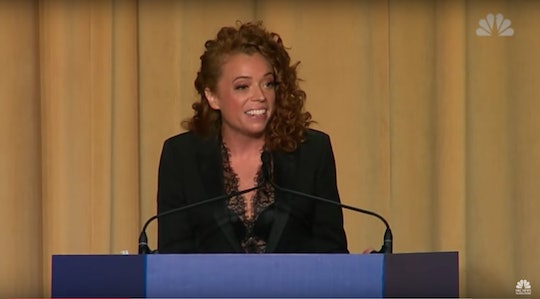 In Case You Missed It, Here's How To Rewatch Michelle Wolf's Fierce WHCD Roast

Saturday's White House Correspondents' Dinner was making itself out to be a quiet evening, with President Donald Trump himself absent, until comedian Michelle Wolf took the podium. No one was safe from critique in Wolf's scathing and fearless keynote-turned-roast, where she cracked jokes about news networks, Republicans, Democrats, and members of the White House administration that were in attendance. With social media still buzzing about the roast, here's how to rewatch Michelle Wolf's White House Correspondents' Dinner roast for maximum enjoyment.

More Like This
High School Valedictorian’s Speech Taking Aim At Texas’ Restrictive Abortion Law Goes Viral
Alicia Silverstone Recreated This Iconic Clueless Scene With Her Son On TikTok
This 3-Year-Old Asked For A Birthday Cake So Sad That Guests Wouldn’t Want A Piece
20 Candid Photos Of Queen Elizabeth With U.S. Presidents Over The Years

First off, this isn't a roast for the faint-hearted. While Wolf didn't go out of bounds by poking fun things like people's appearances, she definitely wasn't hesitant to share what she truly thought of people. The point of a roast is never to protect feelings and Wolf certainly didn't spare anybody's, to the point where some members of Trump's administration reportedly ended up leaving the dinner. According to Politico, Mercedes Schlapp, director of strategic communications, and her husband, conservative activists Mat Schlapp, were among those who walked out long before Wolf's routine was over.

A full transcript of Wolf's roast can be found on The Washington Post. After her opening remarks about Trump, Wolf went on to comment on the president's absence, saying, "Of course, Trump isn't here, if you haven't noticed. He's not here. And I know, I know, I would drag him here myself. But it turns out the president of the United States is the one p*ssy you're not allowed to grab."

She also fired remarks at White House Press Secretary Sarah Huckabee Sanders, musing about Sanders' similarity to a character on The Handmaid's Tale and what the equivalent was of an Uncle Tom for white women. At one point, Wolf tackled a point that was celebrated on Twitter, "Sarah Sanders burns facts and then uses them to create the perfect smokey-eye look. Maybe she's born with it, maybe it's lies."

Sanders herself didn't look to impressed, but hey. It's a roast.

Even with her opening remarks and Trump so broke jokes, Wolf obviously didn't focus her roast on Trump, which she confirmed to CBS News as being because he wasn't present. "I like making fun of people to their face more than anything, like, more than behind their back. It's nicer to make fun of someone when they're there," she said, according to CBS News.

She did, however, confirm in the roast how she views Trump in no uncertain terms. "And, look, I could call Trump a racist, a misogynist or xenophobic or unstable or incompetent or impotent," Wolf said during the roast. "But he's heard all of those, and he doesn't care."

This was the second time, though, that the president failed to attend the annual dinner. In 2017, Trump was the first president in 36 years to skip the WHCD, according to NPR, becoming the first since President Ronald Raegan to make that decision. Granted, Raegan was recovering from being shot in an assassination attempt, according to The American Presidency Project, and even phoned into the event. With the entire point of the annual dinner being to celebrate the First Amendment and honor journalism with awards and scholarships, the president is pretty important.

Trump's insistence on missing out is pretty telling and something Wolf didn't hesitate to call out, going on in her CBS interview to say, "I think it's cowardly not to go. I think it's — the only other person that didn't go was Reagan when he was shot. And he called in."

Wolf's roast captured the frustrations a lot of people are feeling with the current administration. It's definitely something worth rewatching throughout the day, so when you do, make sure to settle down with a nice drink or light snack, and be prepared to laugh.