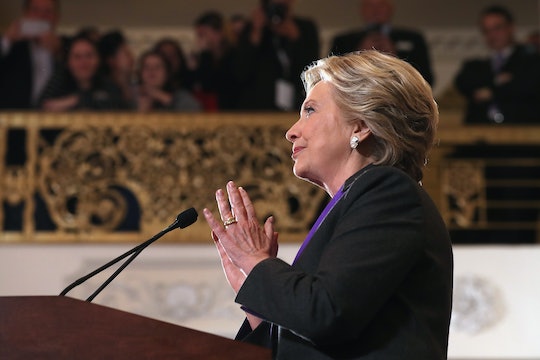 How To Send Hillary Clinton A Thank You Card, Because She Deserves It

At the early hours of Wednesday morning, Clinton reportedly made a private phone call to Trump, conceding the election and congratulating him on becoming the next president of the United States. Clinton didn't, however, make a public concession speech to the nation, voters, or her supporters. That speech came later, early Wednesday afternoon at the New Yorker Hotel. Following a somewhat-emotional and heartfelt speech by her running mate, Tim Kaine, Clinton took the stage to offer her gratitude, the importance of a smooth and peaceful transition of power, the need to unite a clearly divided country, and empowering messages to her supporters, women, and little girls across the country.

Clinton also apologized for not winning the election, which left so many voters saddened and somewhat shocked. After all the work Clinton has done — as her years as First Lady of the United States, her years as the Senator of the state of New York, her years as Madame Secretary of State, and the years she has spent campaigning as the potential first woman president of the United States — it feels wrong to hear Clinton offer her condolences. Honestly, so many of her supporters and voters can't help but feel like they are the ones who owe her an apology.

Thankfully, you can do just that — or offer any other words of encouragement and thankfulness — by sending Clinton a thank you card, using the address below:

During Clinton's concession speech, the former Secretary of State offered a message to the young women and girls who followed her campaign and considered her a representation of all women are capable of. Clinton said,

And to all the little girls who are watching this: Never doubt that you are valuable and powerful and deserving of every chance and opportunity in the world to pursue and achieve your own dreams.

It was clear and obvious that Clinton had a difficult time speaking about the hopes she had for her potential presidency, and the work that is ahead now that she has lost the election. Which is why a thoughtful card — even just a few words — sent to a woman who has worked tirelessly with the hopes of benefitting families, women, children, and the many marginalized people of this country, is the least we can do.

Thank you, Hillary Clinton. Thank you.