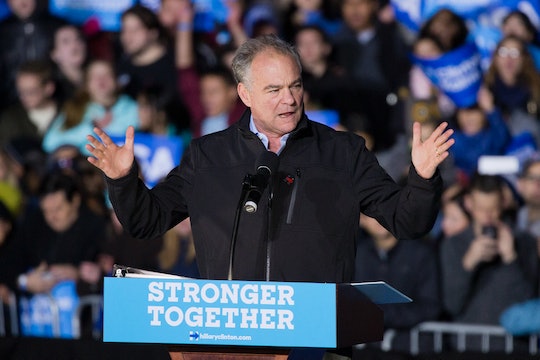 Tim Kaine's Response To The Election Results Give Hope, Despite The Devastating Loss

It's hard to believe the election is over, but everyone knows the real work is just beginning. Although I've personally felt defeated, tired, and scared throughout most of this election night, there is still hope to be found with Tim Kaine's response to the election results. The Virginia senator gave an inspiring response that proves he's still with us, even if it's not in his intended capacity.

On the morning of Nov. 9, Clinton, Kaine, and their campaign team make their way to the New Yorker Hotel to address the nation on the results of election night. Faced with the tasks of keeping supporter's hope alive and introducing the presidential nominee, Kaine took the stage and reassured everyone watching that things would be OK someday.

My wife Anne and I are so proud of Hillary Clinton. I’m proud of Hillary Clinton because she has been, and is, a great history maker in everything she has done as a Civil Right’s lawyer, and the first lady of Arkansas, and the first lady of this country, and senator, and Secretary of State. She has made history in a nation that is great at so many things, but that has made it uniquely difficult for a woman to be elected to federal office. She became the first major party nominee as a woman to be president, and last night she won the popular vote of Americans.

I’m proud of Hillary Clinton because,e in the word on Langston Hughes, she’s held fast at dreams. She was inspired at a young age to an ephiony that if family and children do well, that’s the best barometer for whether a society does well. In everything she’s done, she’s focussed on that. We know she would have made history as a president in one sense, but we’ve never had a president who’s made their whole career about the empowerment of families and children. I was as excited as that in the Oval Office as I was excited to have my friend Hillary there and make history as the first woman president.

I’m excited and proud of Hillary because she has built such a wonderful team. There is a beautiful and kind of comical parable in the New Testament about a vineyard owner who hires people to work and say, “I’m gonna pay you think for the full day.” Then he hires people at noon and says, “I’m gonna pay you the same thing for the half day.” Then he hires people for one hour’s work and he says, “I’m gonna pay you the same.” And those who start early in the day say, “Hold on, We don’t like this. You’re treating everyone who cam elate just as well as you’re treating us.” I’m gonna tell you something — here’s what I’ve come to know so well about Hillary. The team that she has assembled over the years of people who are so deeply loyal to her, because she’s so deeply loyal to them is so inspiring. But I’ve seen that same degree of loyalty and compassion and sensitivity extended to the most recent folks who joined the team. The folks who came to the vineyard with just one hour to go. Her loyalty and compassion, of Hillary and Bill, to people, if you’re with them you’re with them. That is just something so remarkable.

Finally, I’m just proud of Hillary because she loves this country. Nobody had to wonder about Hillary Clinton, whether she would accept an outcome of an election in our beautiful democracy. Nobody had to ask that question. Nobody had to doubt it. She knows our country for what it is. She knows the system we have, and its works and wonders. She’s deeply in love with it, and accepts it. She’s been in battles before where if it didn’t go her way she accepted it, but then woke up the next day and battled again for the dreams she’s held fast to. And that love of country is obvious to everybody.

I want to thank Hillary Clinton for asking Anne and I to join this wild ride. About a week before she asked if I would be her running mate, Anne and I went up to Westchester and sat down with Hillary and Bill, and Chelsea and Mark, and Charlotte and aides for about three hours of conversation to try to determine if we’d be the right people to be on the ticket. And when we got in the car to head back to the airport after the three hour discussion I said to Anne,”Honey I don’t know where we’re going to be on this ticket or not, but I do know this — we’re going to remember that three hours for the rest of our life.” And now we will remember the 105 days that we had with this fantastic couple of public servants and all of you for the rest of our life.

I’ll just say this. Hillary and I know well the wisdom and the words of William Faulkner. He said, “they killed us, but they ‘aint whipped us yet.” And they killed us, but they ‘aint whipped us yet because we know that the work remains. We know that the dreams of empowering families and children remains. And in that work, that important work that we have to do as a nation, it is so comforting — even at a tough time — to know that Hillary Clinton is somebody who, until her very last breath, is going to be battling for the values that make this nation great and the values that we care so deeply about.

When it was announced that Kaine would be making it on the Democratic Party ticket for the election, there wasn't a huge response. According to The Washington Post, only 35 percent of voters were actually excited to see him as the Democratic Vice Presidential Candidate. But as the election went on, CNN noted that voters warmed to him and his platform, especially as he continued to play what he called "defense" for his running mate, Democratic presidential nominee Hillary Clinton.

In fact, Kaine had been shattering ceilings along with Clinton through this entire election. According to The New York Times, Kaine delivered an imperfect speech entirely in Spanish at a rally on Nov. 3 in Phoenix — a historic first. Kaine learned Spanish in 1980 when he worked with missionaries in Honduras and said at the rally that it was his idea to give a speech in Spanish because of the demographics of Arizona.

It's things like that that make me cherish Kaine for who he is as a man, a senator, and as someone who will continue to fight for us. He is listening. He is paying attention. CNN noted that Kaine's support of LGBT rights even carried into his faith, where he proudly proclaimed that as a Catholic, he believed in the God his church taught him about, the one that looked at all of mankind and declared it to be good.

He is a man who stands by his faith, but he also stands by his fellow man. According to NPR, while Kaine has said that he follows the Catholic church as a way to live his own life, he doesn't believe he should force his church's teachings on others. In fact, while he may be against abortion because of his own beliefs, he stands by his party's belief that it's not up to him to decide that — a woman has a right to choose.

And as if all of his campaigning hasn't proved that he's with us just as much as he's with her, his response to losing the election alongside Clinton does. Kaine knows the country is scared. He knows that these election results went against everything a lot of people wanted. His tweet about his daughter proved that he knew why people were voting for him — they wanted a better life for their children, for their daughters. They wanted someone in the office who was going to fight for them every step of the way, who was going to embrace other cultures, other religions, and who was going to stand next to every single one of your daughters and say, "Your body is your body."

The election has been a historic one to say the least. And while our country still has a long way to go, especially because of the damage and separation the election caused, I'm confident that with Kaine as a public official, we can get to where we need to be — together.