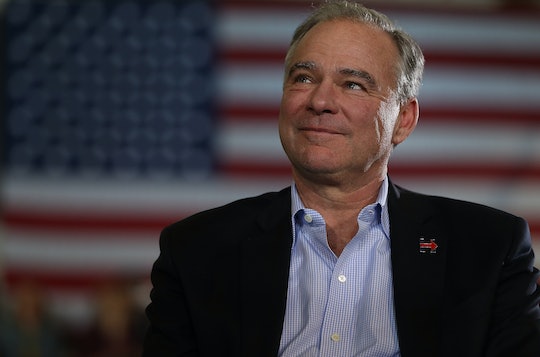 Caught up in the numbers game that currently consumes the final night of the 2016 presidential election, the deeply-felt, lasting influence of the event can often be overshadowed. Enter Tim Kaine, Hillary Clinton's selected VP, offering his take on why this election really matters. Tim Kaine’s tweet about his daughter truly says it all, reading:

Thinking about my daughter right now. No little girl will ever again have to wonder whether she, too, can be president.

Featuring an old photo of Kaine kissing his baby girl on the top of her head, it was a sweet moment to share. Parents everywhere were quick to reply to his tweet, sharing photos of their daughters, embraced in proud hugs and sporting pro-voting gear. Kaine's message really struck a chord, refusing to ignore the tremendous fact that a woman, for the very first time, is closer than ever to earning the position of commander-in-chief.

Annella, Kaine's daughter, is his youngest child. At 21 years old, she appears to have more of an interest in the arts than in becoming president, but that's beside the point; She's grown up in a country that, as of now, has never elected a woman for president. A Clinton victory would flip that perspective entirely, not just for her generation but also for the others coming after. As Clinton's echoed for 20 years, "human rights are women’s rights, and women’s rights are human rights." A female, feminist president would be truly game-changing.

Voting in Richmond, Virginia, Kaine showed up to Hermitage Methodist Home before the polls had opened. His wife, Anne Holton, joined him, as did a 99-year-old voter named Minerva Turpin. "She was the first voter, I was the second voter," Kaine said. "She pinned my 'You Voted' stick on after I completed my ballot."

"We’ve got to speak to it to make sure this country continues to hold a promise that tomorrow’s generation can have it better than their parents did," Kaine told The Washington Post right after his ballot had been cast. Though referring specifically to the need to unite the country in wake of a divisive election, his words also apply to the significance of electing a female president. Showing that women can — and have — been elected president lets future generations of women and girls know that their ambitions aren't limited.