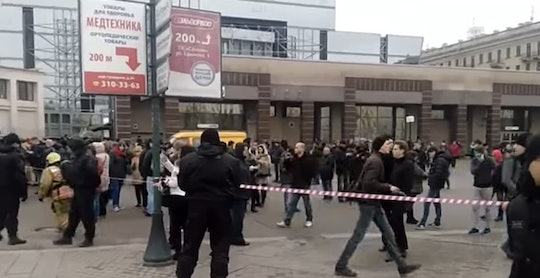 How To Show Support For St. Petersburg

Early Monday morning news broke of an explosion in the Russian city of St. Petersburg. A blast on a train in the St. Petersburg subway killed a reported 10 people and injured an additional 50, according to the Associated Press. In the wake of another horrible loss of life, people are wondering how to show support for St. Petersburg. While President Donald Trump tweets about Hillary Clinton and the so-called "wire-tapping" that Trump claims occurred in Trump Tower prior to his presidency while news of the explosion broke and continued to develop, we at least have a pretty solid idea of how not to show support.

At this time, there doesn't appear to be any social media filters people around the world can use to show their solidarity, but that isn't keeping people from taking to Twitter to voice their condolences for the victims, as well as families and friends of those affected. With so many unanswered questions hanging in the air and the cause of the explosion still unclear — as of this time, it is not known if the blast was an intended terrorist attack or a horrible malfunction of the subway itself — there's little those in St. Petersburg, or around the world, can do but to publicly show that they're thinking for those who have lost their lives or will forever have their lives altered as a result of the explosion.

Other Twitter users are calling for those on social media, and in particularly Twitter users, to post or retweet pictures of the Russian flag, circulating and sharing it far and wide. One Twitter user tweeted, "Russian lives matter, too. Let's widely share the Russian flag to show support to victims of the Metro train blast."

Of course, it's worth mentioning that a great way to show support for the victims and those affected by the blasts is to choose not to retweet, re-post, or otherwise share gruesome photos of the explosion and the victims. Sadly, you only have to go so far as logging on to Twitter to see particularly graphic videos and pictures, some showing people laying on the floor. While there is a need for answers, there is no need to share pictures of the victims. I'm sure we can all agree there's nothing supportive about that.

Our thoughts are with the victims, their families, St. Petersburg and those who call it home.