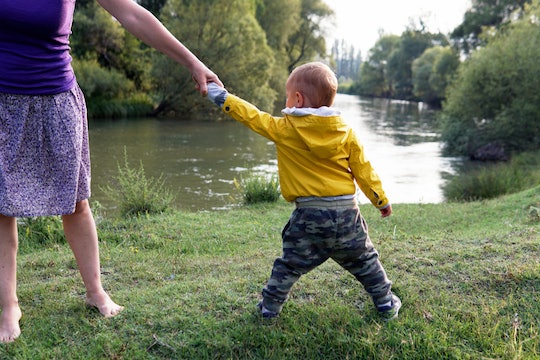 How To Stop Yelling At Your Kid In Three Days, Because You're Sick Of The Guilt

I'm a yeller. I hate that fact about myself. I've always been a yeller, even as a little kid. When I get mad, I blow up. I'm not mean or physically violent, and I never say anything degrading, but I'd be lying if I told you I've never yelled "What the hell?" when my kids do something that angers me. I don't want to be this way anymore. I don't want to be the yeller. And I want to stop now. I've spent a lot of time researching how to stop yelling at your kids in three days, five days, ten days, and I wonder how plausible all the advice really is for moms like me.

The strategies for containing your anger and controlling the instinct to shout and yell are related to both your emotional triggers and your abilities to redirect, according to clinical psychologist Dr. Laura Markham's Aha! Parenting blog. You need to be able to step back and understand when anger is starting to overwhelm you. At that point, stop and redirect. Reframe what's happening in the moment. Is there a way to offer empathy instead of anger? Look at it from your child's point of view, even if you feel like you're coming unglued. It sounds impossible, but it can be done. Yes, your kid just dumped all of the flour onto the kitchen floor. That's going to be a beast to clean up. But, they're 3 years old. They're curious as heck and that flour feels fun between their fingers, and watching it erupt in plumes of white dust is fascinating. Also, they look like Al Pacino in Scarface. Take a picture, post it to Instagram, and laugh.

Yelling at your kids can cause real problems. The New York Times reported that "Households with regular shouting incidents tend to have children with lower self-esteem and higher rates of depression." It's also bad for the person who is doing the yelling. In a different article, the Times noted that yelling can make the parent feel worse, too. You're angry, so you yell, and then end up feeling guilty because of it. It's a never-ending cycle, and not a good one.

While it may not be exactly possible to become the perfect parent overnight, you can make significant changes to your parenting style fairly quickly. I spoke with Jane Nelson, Ed.D., one of the authors of Positive Discipline for Today’s Busy (and Overwhelmed) Parent, and she tells Romper that the most important thing is for parents to "Think about how you would feel if you were being yelled at." The answer is pretty simple: You'd feel crappy, and you never want your kids to feel badly, especially not because of your anger.

Positive Discipline for Today’s Busy (and Overwhelmed) Parent
Amazon
From the jacket: "Positive Discipline guide gives parents the tools to parent effectively without sacrificing their well-being or giving up on their life goals. Instead of creating unachievable expectations, you will instead learn to play to your strengths at work and at home."

"Give yourself some positive time out until you can 'act thoughtfully' instead of 'reacting thoughtlessly,'" Nelson says. (Kind of like the time-outs you might give your kid when you're yelling.) She also emphasizes the importance of a balanced approach to discipline when you're changing your behavior as a parent. "Be both kind and firm," she adds. "Kindness teaches love. [Being] Firm teaches responsibility." With this approach, known as "connection before correction," your kids are less likely to tune you out (they way kids often do when they're being yelled at). And once you change your strategies, the likelihood that you'll feel the urge to yell will naturally diminish.

In fact, as you employ different, non-yelling parenting strategies, you might find that you'll be losing your temper less and less frequently in general. Whether that will happen in three days time, ultimately, is up to you. The truth is, you're technically capable of stopping any behavior (yelling, drinking soda, biting your nails) immediately, it's just a really, really hard thing to do. But once you understand what your yelling is doing to your kids and how much more successful your disciplinary attempts will be when you stop yelling, you should have the motivation you need to make a change right away. I certainly hope this is the case for me, personally, because something has to give. I feel like I give new meaning to the phrase "If Mama ain't happy, ain't nobody happy," and it's having a deleterious effect on my whole household.

However, when all else fails, and you feel like crap, Nelson says to "Ask for a hug. You probably need it, and your child might feel better by helping you feel better."