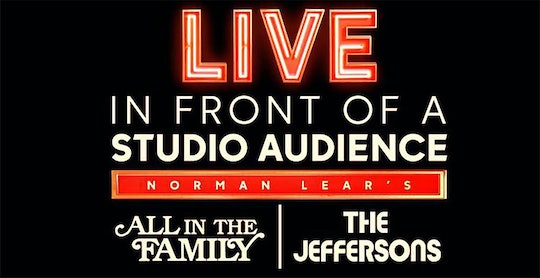 Don't Worry, Streaming ‘All In The Family’ & ‘The Jeffersons’ Live Isn't Hard

It might be 2019, but we're living like it's the 1970s, baby. On Wednesday, May 22, at 8 p.m. ET, Jimmy Kimmel will be hosting Live in Front of a Studio Audience: Norman Lear's 'All in the Family' and 'The Jeffersons'. The ABC special will re-create two classic episodes from the sitcoms live. But it will feature a new cast, including Jamie Foxx, Kerry Washington, and Woody Harrelson — just to name a few. If you're excited about the show and wondering where to watch it online, here's how to stream 'All in the Family' and 'The Jeffersons' Live. Because this isn't the 1970s and you don't have to sit in front of your hefty box television to enjoy every moment in real time.

For anyone who can't get home in time to watch the 'All in the Family' and 'The Jeffersons' Live special, don't fret. You can catch the 90-minute show online with ABC's live stream or through the Watch ABC app, which is available on most Apple and Android devices. That being said, both services aren't exactly free, as you have to sign into your cable provider to successfully watch the live stream.

If you don't have cable, you can always try using alternative services such as Hulu Live TV and Sling TV, which offer packages that allow you to watch your favorite channels — like ABC — live. Just make sure you double check your local listings before you make your final purchase. Both services also permit a week-long free trial in case you aren't 100 percent sure.

In an interview with Forbes, Senior Vice President of Alternative Series, Specials & Late-Night Programming for ABC Entertainment, Rob Mills, revealed that the idea for 'All in the Family' and 'The Jeffersons' Live came after Fox's Grease: Live aired. Over the phone, Mills shared that Kimmel said, "I've got the answer to a big live event. We should restage classic sitcoms live.”

And as they say, the rest was history. Kimmel reached out to Lear, who was immediately onboard. The host then contacted big stars like Wanda Sykes, Marisa Tomei, and Will Ferrell, who also jumped at the chance.

Speaking to ABC in the 'All in the Family' and 'The Jeffersons' Live teaser, Kimmel said, "It really is crazy when you have something great, how quickly people will agree to be apart of it."

Although Kimmel and Lear are re-creating episodes of All in the Family and The Jeffersons, this is a one-night-only kind of deal. In an interview with Vanity Fair, Lear made it clear that the two shows wouldn't receive the revival treatment.

“The show isn’t coming back so much as it’s being honored with the performance,” Lear said.

Nonetheless, the special live event will likely stick with audiences even after it airs. Still speaking with Vanity Fair, executive producer Brent Miller shared his hopes for All in the Family' and 'The Jeffersons' Live.

“At a time when there’s so much out there to watch and people have kind of forgotten about ‘appointment TV,’ the reason for this event is that we hope people will watch together,” Miller said. “Families all around [the TV], like we did back then. That would be the gift of gifts—to have people watching it together.”

Meanwhile, Lead explained why the live event is extraordinary in today's age of television.

"The American public may not realize it as they tune in, but they don’t get to see a lot of live, well-rehearsed material done for millions of people live," Lear said. "It’s very different, and it’s very brave.”

Regardless of how you watch the 'All in the Family' and 'The Jeffersons' Live special, you're pretty much guaranteed to have a good time. From the star-studded cast to the blast from the past, it looks like Kimmel and Lear stumbled onto something great.

Live in Front of a Studio Audience: Norman Lear's 'All in the Family' and 'The Jeffersons' will air May 22 on ABC.