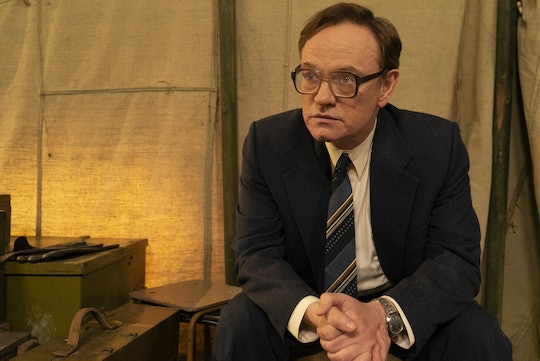 You Can Now Stream HBO's 'Chernobyl' Across Multiple Platforms

Lately, there are so many amazing TV shows, docuseries, and miniseries on television that it can be hard to keep up with everything as it airs. Luckily, that’s what DVR and streaming platforms are for. And if you didn't catch it live or just want to re-watch every heart pounding moment of this HBO miniseries, you might be wondering how to stream Chernobyl. It officially ended on June 3, but there are still a handful of ways to watch or re-watch it.

The drama follows different men and women affected by the 1986 Chernobyl Nuclear Power Plant accident in Soviet Ukraine that caused widespread radiation and destruction. It’s a terrifying enough story, but the fact that it is based on real events really drives home the realistic horror of the miniseries. Although some of the characters were manufactured to give more of a dramatic and storytelling flow to the miniseries, much of the details remain true to what actually happened during and after the accident.

Chernobyl is actually largely based on the stories of those who lived through the man-made disaster, as told in the book Voices from Chernobyl. So just in case you needed another reason to watch it, the miniseries was made to be as true to the actual events as possible.

Since it is an HBO show, you can stream Chernobyl with your HBO Now or HBO Go subscription. It’s also available on demand on HBO right now. But if you don't have access to any of those, it is now available on Amazon Prime Video. If you have a Hulu subscription that includes an HBO add-on, then you can also stream the miniseries that way. So whether you watched all of the episodes as soon as they aired, missed a few in the process, or waited until now to marathon watch the entire series, it’s available and there is more than one way to stream Chernobyl right now.

Craig Mazin, who created and wrote Chernobyl, told Vice that it had been his goal for years to create the realistic and memorable miniseries. He said that ever since it happened when he was 15 years old, he had been curious about it, but it wasn't until 2015 that he really started to research how it happened and the fallout.

"What I discovered as I kept reading was something that was shocking, and remarkable, and kept coming at you," he said. "It was a little bit like I had discovered a war that no one had really written thoroughly about. And then, of course, I found out that people had — it’s just that it hadn’t crossed over into everyone’s consciousness. And I became obsessed."

Mazin said that he researched different articles about the nuclear accident and read through Voices From Chernobyl to gain a better understanding. He also watched several documentaries to see survivors’ firsthand experiences. Eventually, his obsession with the incident became the HBO miniseries and it tells a story of the nuclear reaction and the fall of the Soviet system.

If watching (or re-watching) Chernobyl isn't enough to satisfy your own thirst for knowledge on the topic, you can tour abandoned towns near the Chernobyl nuclear power plant and in the past year, this morbid tourist attraction has seen a boom in attendance. This is likely thanks in part to Chernobyl on HBO.

It’s not all that common to find a miniseries that mixes drama and real life so easily, but that’s part of what made Chernobyl so popular so fast. So if you didn't get to see it when it aired on HBO in May and June, you can stream it all now instead.