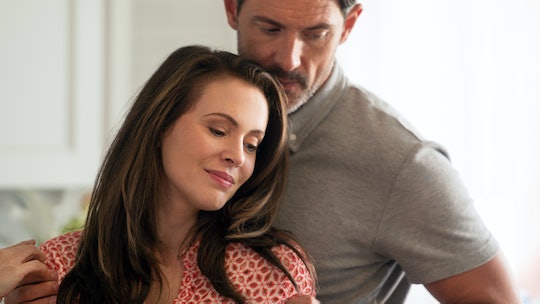 Lifetime's Book to Screen Summer Movie Series kicks off on Saturday, Jun. 15, with the premiere of Tempting Fate. Based on Jane Green's critically acclaimed best-seller, the new film marks the directorial debut of Grey's Anatomy star, Kim Raver, and is headlined by a star-studded cast, including Alyssa Milano (Charmed), Justina Machado (One Day at a Time), and Erika Christensen (Parenthood). And with this many powerhouses working on together, you won't want to miss it. So if you're unable to watch the movie live in front of your television, then you'll need to know how to stream Temping Fate online.

Although popular streaming platforms like Netflix and Amazon Prime may not have the movie available when it premieres, you still have plenty of other options if you can't watch Tempting Fate live on Lifetime. You can download the Lifetime app, which gives you full access to the network's entire library, including the latest movies and shows. Since the app is available to download for Android and Apple devices, you'll be able to catch Tempting Fate, even if you're on-the-go. However, while the Lifetime app is free to use, you'll need to sign into your TV provider to access everything the network has to offer.

Now, if you're a cable cutter who is looking for streaming alternatives, then look no further. Hulu Live TV, Sling TV, and DirecTV Now all offer packages that will allow you to watch some of your favorite channels live. Nonetheless, you will need to check your local listings to make sure your area gets Lifetime or else you might run into a bit of trouble when it comes to streaming Tempting Fate when it premieres live.

Not in a hurry to find out where to watch the film? Or maybe you just want to watch it again? Well, if you aren't interested in the Lifetime app or even the option to buy or rent Tempting Fate from Vudu or Amazon Video, then you can still try to catch a rerun of the movie when it airs on the network. According to the Lifetime's official schedule, Tempting Fate will air again on Jun. 16 at midnight and 6 p.m. ET, as well as Saturday, Jun. 22 at 6 p.m. ET.

Per Lifetime, Tempting Fate follows the story of Gabby (Milano), a mother-of-two who shares a picture-perfect life with her husband, Elliot (Steve Kazee). That is, until she meets Matt (Zane Holtz), a handsome younger man who "ignites a fire and desire within her." What starts as an innocent business opportunity evolves into an affair that changes the lives of everyone involved.

While the Lifetime film sounds like the perfect excuse to pull out the wine on Saturday night, there are also more layers to the story than you might think. In an interview with the Hastings Tribune, Milano explained what drew her to her character on Tempting Fate.

“I have to feel that I can contribute something and make that character special. The thing that made Gabby so interesting to me is how flawed she is,” Milano said. "We don’t sort of romanticize her choice. She makes the choice and her world explodes. Then we see her put the pieces back together and that was very interesting to see a character felt with so much depth and nuances.”

Truth be told, when I think of movies on Lifetime, I think of delightfully cheesy films that don't always go beneath the surface. So it'll be interesting to see how Gabby's story unfolds.

Regardless of how you choose to watch Tempting Fate, just don't forget to turn on and tune in whenever — and wherever — you can, because the Lifetime movie will definitely keep you on your toes.