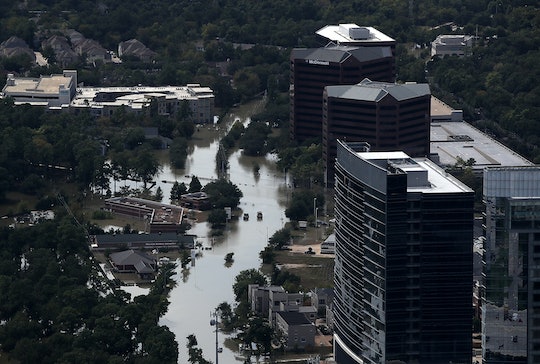 Here's How To Stream The Hurricane Harvey Relief Telethon

Hurricane Harvey has left immense destruction in its wake, decimating southeast Texas and the surrounding areas. Over 60 people have lost their lives already, and tens of thousands of others have been displaced from their homes. Recovering from the devastation caused by the hurricane will be a long and slow process, and those affected need help. Many charities exist to provide that very necessary aid, but there will also be a telethon to rally support and raise funds. Here's how to stream the Hurricane Harvey relief telethon, so you won't miss it.

The hour-long telethon is being called Hand in Hand: A Benefit for Hurricane Harvey Relief and it will air on Tuesday Sept. 12 at 8 p.m. E.T. on numerous networks, including ABC, CBS, NBC, Fox, and CMT. However, if you don't have access to a TV, that doesn't mean you have to miss out on supporting the telethon and its many charitable endeavors. The event will be streaming on Twitter, Youtube, and Facebook as well, at the same time as it debuts on television. If you can't tune in live on TV, then that would be the best way to watch the telethon.

Links to the streaming channels have not been made available yet, but icons for each option on the Hand in Hand website indicate that they will be there on the day of, so be sure to keep a lookout for them.

Proceeds from Hand in Hand will be donated to a number of charities, including United Way of Greater Houston, Habitat for Humanity, Save the Children, Direct Relief, Feeding Texas, and The Mayor's Fund for Hurricane Harvey Relief. The telethon will also seek to provide assistance to any victims of Hurricane Irma, if possible.

Beyoncé, George Clooney, Julia Roberts, Barbra Streisand, Reese Witherspoon, and Oprah Winfrey will be participating in the telethon, but they won't be the only celebrities lending a hand. There will also be appearances (both live and pre-taped) or performances by Jamie Foxx, Karlie Kloss, Rob Lowe, Matthew McConaughey, Dennis Quaid, Kelly Rowland, Matt Lauer, Adam Sandler, Ryan Seacrest, Michael Strahan, and Blake Shelton. George Strait will appear live from his benefit concert at the Majestic Theatre in San Antonio, Texas.

Hand in Hand will be available to watch on multiple platforms, so viewers can't miss it.