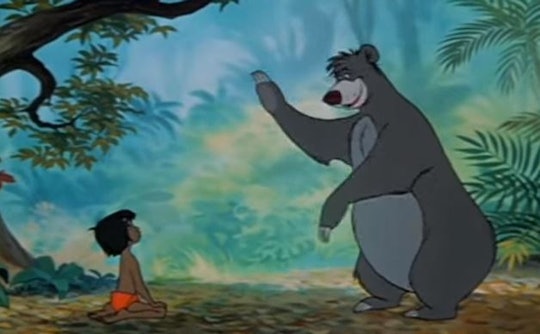 If you're the parent of a little kid, you're likely in one of two stages: still stuck on Frozen, or you've already made the transition to the latest Disney movie for the elementary school set, The Jungle Book reboot. The remake is worth the $4o snack bar run. The Jungle Book is fun, the music's great, and if I have to hear "Let It Go" one more time, mama's gonna get ugly. But if the new flick is making you nostalgic for the 1967 classic, here's how to stream the original Jungle Book.

Netflix is a no-go. The streaming service doesn't offer Jungle Book. If you're willing to buy the movie you can go to iTunes, Amazon, Google Play, or YouTube to stream on-demand. You also have the option of going to Disney Movies Anywhere, a streaming service that offers everything from Pixar titles like Inside Out and Monsters University to classics like Dumbo. Regardless, the Disney collection offers plenty of opportunities to move on from Anna and Elsa already.

But you might have a tough time convincing your kiddos the original is worth watching. Kids, am I right?

The Jungle Book's remake is dominating at the box office. Since it's April 15 opening, it's become the No. 1 movie in the world. The flick features one lone live actor, Neel Sethi, who plays Mowgli, surrounded by a cast of animals created with CGI. Critics have been pretty impressed with it.

"The effects in The Jungle Book are so casually spectacular, you even forget they're effects," reviewer Neil Pond wrote in Parade. "You become so completely, convincingly immersed in the realistic, storybook world, just like Mowgli, it doesn't seem unnatural hat a menagerie of creatures can speak — or sing — just as easily as they can growl, prowl, crawl or climb."

The Jungle Book's early success, according to a report from The Washington Post, means we're likely to get many more live-action Disney remakes in the years to come. It makes good business sense, parents are drawn to the movie by nostalgia, and kids love the timeless story wrapped in CGI magic. But The Jungle Book isn't the first Disney foray into live-action success. Alice in Wonderland, Cinderella, and Maleficent were all huge hits with audiences. And more are likely to be on the way to a theater near you.

But, regardless of what you think about the trend of Disney rebooting its animated classics, fans always have the originals available on demand from a streaming service to take them back. If they can figure out a way to make a live-action Lady and the Tramp, I'm totally there.