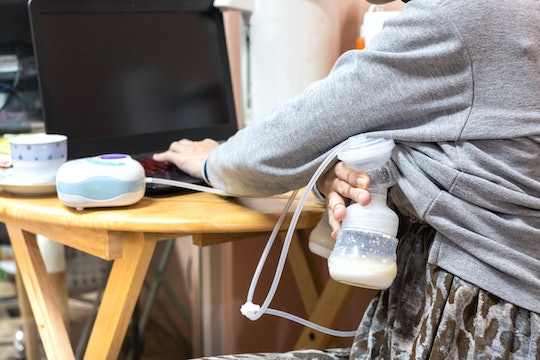 For some women, breastfeeding simply isn't in the motherhood cards. Mastitis, extremely hectic work schedules, babies who absolutely refuse to latch — there are myriad reasons why a woman might not be able to nurse. But this doesn't necessarily mean all of these moms immediately climb board the Enfamil train. Rather, some new mothers decide to make their Medela their best friend, and to pump all (or at least most) of their babies' milk. As one might imagine, this is by no means an easy undertaking. Have a friend or partner attempting this? Well, here are some of the ways you can support a mom who is exclusively pumping.

Glenn says that not being able to breastfeed can be a real emotional hurdle for some moms. "Emotionally, many exclusive pumping moms really wanted to nurse, and grieve the loss when it doesn't work out. I hear the word 'guilt' a lot, like 'I feel so guilty that I failed at nursing' or 'I feel guilty for not trying longer to make nursing work.' To be clear — I don't think that they should feel guilty at all! But that is way a lot of them tend to express how they feel," she tells Romper.

And for some moms, the decision to pump without nursing can also be a bit alienating, and make them feel like they don't fit into a certain mom camp. Glenn says that at first, she also felt a little inadequate. "I felt afraid of judgement at first, because I had 'failed' at something important to me, that my friends had succeeded at. And obviously when my friends talked about nursing, I couldn't relate to the conversation."

On top of all the emotional baggage, there are, unsurprisingly, many practical challenges that come with exclusively pumping. Moms have to find the time (which new moms always have loads of, right?) to squeeze in (pardon the pun) pumping sessions. Glenn says this is obviously tricky when a mother is alone and trying to care for a baby, or is running around trying to do errands.

For any partners out there who would like to lighten the load or make things a smidge easier for the pumping mom, Glenn's best advice is to take on cleaning duty. "Put them in charge of washing the bottles and pump parts! Since the exclusive pumper is making the baby's dinner, it makes sense for her partner to clean up, right? Seriously, though — this is a huge task, and it can be really helpful for an exclusive pumper to not have to manage it on top of pumping."

For real, anyone who has ever dealt with a breast pump knows what a mad scientist explosion of tubes and cups and parts it is. And then having to carefully sterilize all of those tubes and parts? Beyond exhausting.

And to any friends who would like to help out, but can't actually come in to assist with scrubbing breast shields, there are plenty of other ways to be a cheerleader. For starters, just acknowledge how challenging the whole thing is, and let the mom know she's awesome for regularly hooking her nipples up to a suction machine. Send her a funny card, or buy her some fenugreek and a cute pumping bra. Let her know you're rooting for her, and that she's doing an amazing job. Glenn says the support will most definitely be appreciated: "Exclusive pumpers dedicate two+ hours a day to pumping breast milk because it's important to them, and they don't ever get to take a break from it. When someone you love is working hard at something that's important to them, you support them!"

Glenn says she herself was very lucky in that her mom friends were all very supportive during her exclusive pumping period. And it wasn't long at all before the tables were soon turned: "When they went back to work and needed pumping advice, I got to be the expert, which was kind of fun."