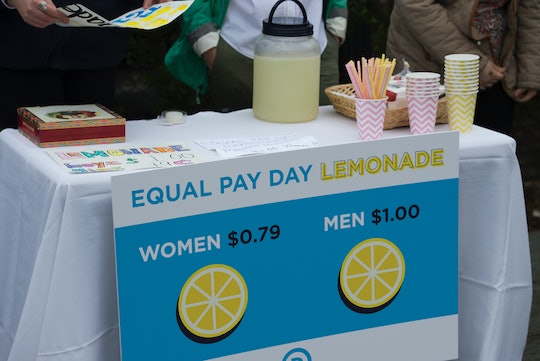 How To Talk To Kids About The Gender Wage Gap, Because It's Something They Need To Know

As most parents know, kids tend to pick up things pretty quickly, especially when it comes to what's "fair." For that reason, figuring out how to talk to kids about the gender wage gap will probably be easier than talking to say, Senate Minority Leader Mitch McConnell, who has led the charge against the Paycheck Fairness Act on multiple occasions. Equal Pay Day is all about educating people, every April 12, on the many issues surrounding the gender wage gap, and this being an election year, it's highly probable that some precocious kids will hear about equal pay in the very near future. Or least one might hope so.

So how do you go about explaining something to a tiny human that, according to some developmental researchers, instinctively knows about what's fair and what isn't, even if the act doesn't apply to them? Starting out with the facts is probably a good start, by telling them that women get paid just 79 cents for every dollar that a man makes. The "why" is a little harder, but they might already know more than you think they do. Jimmy Kimmel recently did a bit on his late night talk show where he hits the streets to ask kids why they thought women might be paid less than men. One especially adorable mini-feminist had a hunch that earned him a well-deserved round of applause. "Because [women are] very underrated," he replied. "Because they can do more, but people expect them to do less."

Take a lesson from these kids. When you explain complex stuff like this to younger children, the best way to go about it might be to open up a series of "but why?" questions that allow you to explain sexism in different ways.

Hopefully by the time they're old enough to understand it, Congress may have passed the Paycheck Fairness Act too, which you can explain in simple terms as well. Unfortunately, it will probably take a while (the legislation was presented to the Senate in 2013, was backed by Maryland Sen. Barbara Mikulski, and has seen no action at all since 2014, since Republican legislators tend to block it whenever it comes up). But that doesn't mean you can't break things down now and point out how ridiculous that sounds.

The Act is basically an amendment to the Equal Pay Act, with provisions that really force an employer to justify a difference in wages based on a factor "other than sex." Besides just being more fair, some estimate that paying women as equally as men would also mean about half a trillion dollars floating around the economy. And that just means more money for toys, puzzles, and ice cream cones — something all kids can get behind.

Opponents to the amendment say that the act would hurt, not help women. Sen. McConnell said in 2014 that the Democrats were trying to distract the public from the conversation about the Affordable Care Act that was happening at the time and would "double down on job loss all while lining the pockets of trial lawyers." It's almost like they're assuming employers would be into breaking a law so much that women would be suing corporations all over the place. It's been a strong enough argument to essentially allow Congress to ignore the legislation, until, of course, an election year or on April 12.

It might sound complicated to grown-ups, but the gender wage gap is probably something your kids will grasp right away, given how easily they understand the concept of fairness. And hey — if nothing else, at least it's easier than the "birds and the bees" talk.