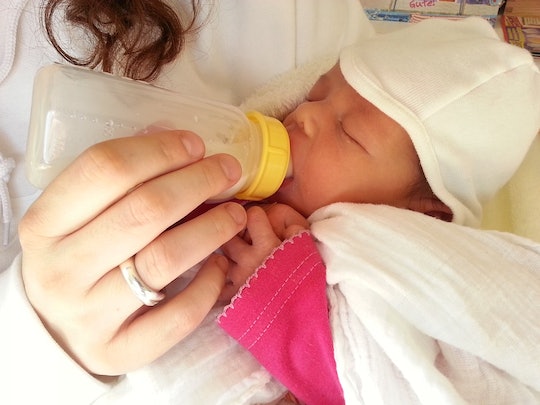 How To Talk To Your Doctor About Formula Feeding

There's no doubt that every new mom feels pressure. Whether it's about bouncing back to your pre-pregnancy weight within six weeks or getting your baby to sleep through the night, it's all overwhelming and can leave you feeling defeated and like you have no support. Especially if the one pressuring you is your child's pediatrician. For moms who are on the fence about breastfeeding, one of the most anxiety-inducing things is not knowing how to talk to your doctor about wanting to formula feed. It's no secret that breastfeeding is incredibly beneficial for you and your baby, but the stigma against formula feeding has left a lot of moms feeling less than, even if they know that a fed baby is really what's best.

Healthy Children, a website from The American Academy of Pediatrics, noted that there is a lot of family pressure to bottle feed rather than breastfeed, but there's not much information on if you feel the pressure to breastfeed. In fact, all of the information available on formula feeding is lumped into a category on nutrition with tips on how much formula to give, why your baby is spitting the formula up, and how to choose a brand for your baby.

But a lot of parents are struggling. They don't want to breastfeed and their reasons can vary. So how do you talk to your doctor about it?

The first thing you need to do before you talk to your pediatrician about formula feeding is to feel confident in your decision. Look at why you want to formula feed. Did you struggle to breastfeed in the past? Are you uncomfortable with breastfeeding? Do you just have a preference? All are valid reasons to make whatever decision you want — you don't have to justify this decision to anyone. But it is worthwhile to know that you are confident in it. If you're on the fence at all, having the conversation with your pediatrician can make you even more anxious.

And then how do you talk to your doctor about formula feeding? You simply do it. Chances are, your doctor isn't going to pressure you. They may ask you why you aren't breastfeeding, but here's the thing — you don't have to give an answer. Sarah Sullivan, a formula feeding mom, tells Romper that when she went to her daughter's first pediatrician appointment, the doctor looked at her and asked why she wasn't breastfeeding. "I told him I worked a really demanding job, that the hours were long and often sporadic, and I thought formula feeding would be one less struggle when adjusting to motherhood. I really didn't think I should have to explain it though," Sullivan says. "He shook his head and started listing all of the benefits of breastfeeding, as if I didn't know. When he got done, I told him that I also thought my health was important and that if formula feeding made me feel less anxious, chaotic, worried, and pressured, then that's what I was going to do. I found a new pediatrician the next day and when I told him I was formula feeding, I asked, 'Do you want to know why?' He said, 'Only if you want to tell me. I just care that you feed your baby.' I could have cried."

If your pediatrician gives you a hard time about formula feeding, my advice is simple: find a new doctor. As long as you are confident in your decision to formula feed and as long as your baby is happy and healthy, there's absolutely nothing a doctor should pressure you into. If you're on the fence about breastfeeding and want more information before making a decision, reach out to a lactation consultant. Otherwise, prepare to stand firm and tell your doctor that you've decided to formula feed. Although it's likely that they may have some questions, you don't have to assume they aren't being supportive. "If my pediatrician hadn't gone on and on about the benefits of breastfeeding, I might've believed he was just curious about why I was formula feeding," Sullivan says. "If I told him I wanted to breastfeed, but I was scared, I would have understood him directing me to a lactation consultant. But I felt like he basically said I was an idiot and the reasoning behind my decision wasn't worth it."

If you're nervous about the conversation, I get it, but try not to be. Your pediatrician is there to support you and your baby. If formula feeding is your choice, your doctor should respect that. There's already enough shame and self-induced guilt surrounding the choice to give your baby formula; don't let your doctor be apart of that. Stand proud, stand firm, and be confident in your decision to formula feed. The only one you have to answer to is you and your baby. If both of you are happy, nothing else matters. (Except for if there's enough bottles in the pantry because cleaning those things is a total pain.)