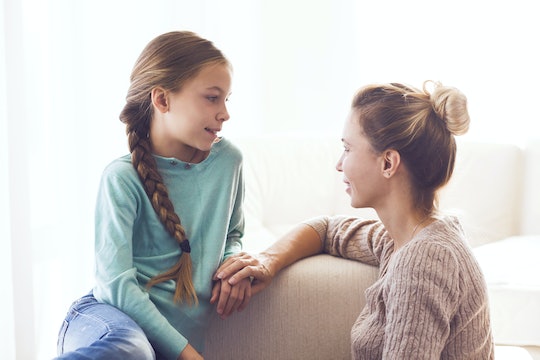 Here's How To Talk To Your Kids About Suicide, According To Experts

As a mom to an almost 3-year-old, a lot of our serious conversations revolve around sharing, boo-boos, and why it's important to get to bed on time. But as a woman who has borne witness to parents raising two children much older than my own, I know some much more serious topics are coming down the pipeline. And with the recent news of Kate Spade and Anthony Bourdain dying from suicide, or even controversial shows like 13 Reasons Why, those conversations might include mental health. But if you're wondering how to talk to your kids about suicide and related subjects, then experts say you're not alone.

"Kids are curious. They will ask — maybe even details," psychotherapist, author of My Self, and owner of Serendipitous Psychotherapy LLC, Kelley Rompza Kitley tells Romper in an email interview. "Keep it simple." Depending on the age of the child, she says you will want to be honest and open to questions your child might have, even if it feels uncomfortable. "Don’t try to avoid it or hide it. You want your kids to hear it from you."

Suicide Awareness Voices of Education (SAVE) says this might start with explaining the origin of suicidal ideations. According to Psychology Today, SAVE recommends saying something to the effect of: “Our thoughts and feelings come from our brain, and sometimes a person’s brain can get very sick — the sickness can cause a person to feel very badly inside. It also makes a person’s thoughts get all jumbled and mixed up, so sometimes they can’t think clearly. Some people can’t think of any other way of stopping the hurt they feel inside. They don’t understand that they don’t have to feel that way, that they can get help."

Claudia Luiz, a psychoanalyst and author of The Making of a Psychoanalyst, says it's also not necessary to bring the subject matter to your child's attention until they express they have questions about suicide or you find they have been exposed to the information via a friend or something they have overheard. "Instead, wait for subtle signs from your child," she tells Romper in an email interview. Luiz says cues your child may be open to a discussion may include questions like, "Did you hear about Kate Spade, Mom?" or "Mom and Dad, do you know anybody who committed suicide?" These types of comments are "subtle signs that your child is open to a discussion," she notes.

Dr. Nicole Washington, a board-certified psychiatrist who works with those in crisis and with psychiatric emergencies, tells Romper this is an example of an instance where a parent should ask their child what they know about suicide. "It is very common for our kids to know much more than we give them credit for, so it will help the parent to know what exactly the child already knows or at least thinks they know about suicide," she says. "Secondly, you want to be sure that you are dispelling any myths that your child may have about suicide and this may require you to educate yourself on suicide." Washington says she recommends The Suicide Prevention Resource Center for materials that can help you talk to your kids in a more meaningful and factual way.

Luiz says giving your kids time to express what they think about suicide will also help direct the conversation. "By keeping the questions neutral, directed towards other people, and interested in promoting discussion, your child will not pick up on your anxiety, or develop new anxieties of their own," she says. "In short, watch where your child wants to go with all this, and ask plenty of questions. Deal with your own anxieties and fears with another adult."

Keep in mind that you will also want to discuss whether or not your child has ever had feelings of "being so hopeless that they thought they would be better off [deceased]," Washington, a mother of two, says. "And you want to ask if they have had any friends that they are aware of who have had these kinds of thoughts."

Ultimately, Washington says, you want conversations like these to help you create a space where your children can talk to you about sensitive topics without fear of upsetting you or worrying you. "Remember, it’s not the feelings themselves that are trouble, but the ideas we have about them that can send us into anxiety or despair," Luiz adds.