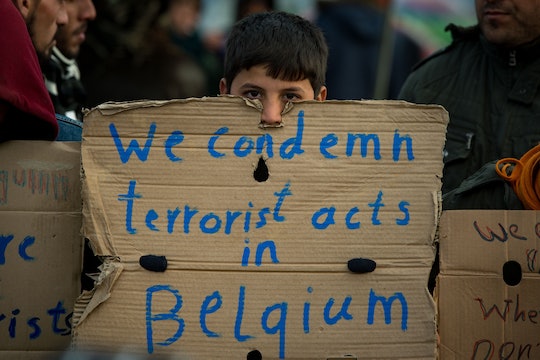 How To Talk To Your Kids About The Brussels Attacks

Early Tuesday morning, March 22, three separate explosions reverberated through two key transportation hubs in Belgium: Maelbeek Metro and a departure hall at Brussels' Zaventem Airport. The Brussels attacks are a stark reminder of the terror plaguing European cities, and as parents, it can be crippling to even think about how to explain the Brussels attacks to kids. In the wake of the devastating terrorist attacks that ripped through Paris in November 2015, talking to children about the Parris attacks involved a measure of sensitivity, openness, and respect. Talking to children about what happened in Brussels will likely involve much more of those same talking points. In the hours following, ISIS claimed responsibility for the Brussels attacks, and now many parents and caregivers are faced with a slew of terrifying questions: Should I talk to my kids about Brussels, and if so, how do I do it?

There's no easy way to wrap your head around the subject of terrorism, and even as an adult it's impossible to truly get to the heart of why people think taking innocent lives is an acceptable action. (I say this because it's something I still deeply struggle with.) However, it's unfortunately the world we live in, and it's something that children, no matter our desire to endow them with everlasting innocence, will come to realize sooner rather than later. In an interview with TIME, Harold Koplewicz, President of the Child Mind Institute, said that honesty, from the get-go, is definitely the best policy. "Don't delay telling your children," Koplewicz said. Adding, "It's very likely that your child will hear about what happened, and it's best that it comes from you so that you are able to answer any questions, convey the facts, and set the emotional tone." However, Koplewicz warns that "children younger than 5 tend to confuse facts with fears," so he suggests limiting access to news and watching what you say and how you say it.

A big component when talking to kids about terrorists attacks in general (and not just Brussels), is remembering that, as Koplewicz said, "you don’t have to give them more details than they ask for." And a guide for parents on talking to children following a recent shooting, which was published on The National Child Traumatic Stress Network (NCTSN) website, only further backs up that statement. "Let [kids] know that they are welcome to ask questions and express their concerns and feelings. You should remain open to answering new questions and providing helpful information and support. You might not know all the answers and it is OK to say that." Experts by and large recommend following the child's lead when talking about such complex, emotional, and involved issues. Doing so allows parents to put events in terms and language that a child understands, and also respects the child's need for information.

Melissa Brymer, Ph.D, a part of the National Center for Childhood Traumatic Stress network based at UCLA, spoke with Romper in the days following the attacks on Brussels, and says that "asking [your child] if they've heard anything" is a great way to begin the conversation because it "offers your child a way to take the lead." Brymer adds that doing so allows you a "way into" the conversation, which, for parents, is invaluable. Obviously there's no one-size fits all way to broach a topic as heavy as this, so Brymer recommends tackling the conversation in a way that feels appropriate for your child's age and maturity level. Obviously you won't talk to your 15 year old the way you'd talk to a toddler, so Brymer suggests knowing that, and then looking for a way in.

NCTSN also encourages parents to talk to their children in response to bombings, even if the child doesn't express immediate interest. "Silence suggests that the event is too horrible even to speak about," the guide noted, and given the immediacy and abundance of social media, the NCTSN added that it's likely "children and teenagers have heard about" what happened. Brymer says that "with adult and middle school-aged children, if they have access to a smartphone or spend time on the Internet, [having the conversation about what happened why it happened] is important because it's difficult to compete in this day and age with apps and alerts." She says that having the conversation as soon as you're comfortable offers parents a means to "indicate that something did happen" and also allows them to "take the lead" in the conversation.

Though Brymer admits that it's hard to protect kids from all the things they're exposed to at school, after-school programs, on TV, and in passing conversations, she says that even "saying something like, 'Hey, something happened in Belgium, and if you want to talk about it, or if you've heard about it, I'm here for you,' allows the space for a child to have a place to go to ask questions and raise concerns." And it doing so, it allows a pathway for kids to go straight to a reliable source for information instead of picking up details elsewhere. "Many times there's misinformation out there," Brymer says, "and it's important for kids to know that if they hear information, they can go back to [the parent]." Doing so helps eliminate the flutter of he-said-she-said information, and also cuts out on racially charged rhetoric that may not be even remotely factual.

And on the racially charged language, front, Brymer says that our country, as a whole, needs to "create better language to explain to kids that there are groups [out there] who have very extreme ideas who have done really bad things, [and] who've hurt people." Even though some are quick to wrongfully pin blame on entire communities and entire religions, Brymer says that as caregivers and providers for children, parents have to "be careful not to identify [the attackers] with any particular [religion]," and she stresses thoughtfulness on the part of the parents. A huge component when offering children the information on a level they can understand means coming to terms with our own shortcomings.

"Part of it, as parents," she says, "is [admitting] that there are some unknowns, so one of the important pieces to think about for us is: 'How would I talk to other adults about this first, and what kind of language would I use?'" Dismantling the way you'd approach the topic with fellow adults provides parents a unique opportunity to think about the language and dialogue they'd use when exploring these events with other adults. Though you won't say the same thing you'd say to a friend to a child, those same biases may creep into the conversation, and avoiding that at all costs ensures that your children are getting an honest, factual means of information. Brymer adds that there's no shame or failing on the part of a parent by first asking friends how they'd broach the topic with their own kids.

"We all have other parents [that we know], so sharing a dialogue and asking them what they think will work for a set of kids is incredibly helpful. You have to realize that what we might say in Boston, where there has been acts of terrorism, might be very different than what we say in Utah. So it's absolutely OK to stop for a minute to share knowledge and wisdom with others who have kids at these same age levels in order to wrestle with [how you'll talk about terrorism to kids] together," she says.

Obviously no parent dreams of broaching such a convoluted, complicated, and serious topic with their child, but as Brymer notes, there are ways into the conversation that arm children with sense of control. Offering kids factual and honest outlets to ask questions, receive answers, and voice concerns not only reaffirms their safety and trust in their caregivers, but it also gives them the best possible launching pad if (though it may, sadly, be more "when") they're ever faced with a situation like this.