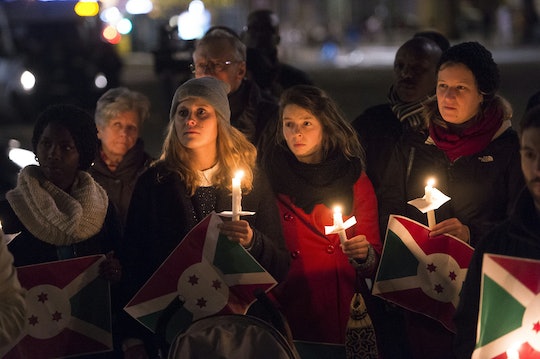 Should You Tell Your Kids About Brussels? These 3 Truths Will Help You Decide

My sons were small when the 9/11 attacks happened. I remember I took them out of school for the day because I needed them. I needed them in the room with me, I needed to see they were safe and well and sweet. They were too young, I thought. Too young to be introduced to so much hate. And here we are again, fellow parents. Wondering, "Should I tell my kids about what happened in Brussels?" What good could possibly come from exposing an innocent child to such horrors?

More Like This
Apple Card Family: How It Works & What Your Kids Can Learn
Attorneys General In Nearly Every State Oppose Facebook’s “Instagram For Kids” Plan
Vaccinated People Can Ditch Masks. Where Does That Leave Kids?
The 7 Best Water Tables For Your Little Ones

After the suicide bombings rocked Brussels, Belgium on Tuesday, killing at least 34 and injuring 230 more, we were naturally brought back to all of the dark corners in our recent history. All of the fear, and the hate, and the accusations. As parents we want to protect our kids, and this is probably one of my favorite things I've discovered about myself since becoming a mom: I want to protect someone. Four someones, actually. Fiercely, wildly. I want them to never feel a single hurt. This is what we do, as parents. We want only beautiful, peaceful things for our children.

But I realized three deeply important truths after 9/11, truths which continue to impact the way I see the world today — especially today. I hope they help you, fellow parents. Or at least remind you that you're not alone in the struggle.

The World Does Not Actually Revolve Around Them

Encouraging your children to think they are somehow more deserving, more privileged, or just plain better than any other kid out there is not the way to raise good people. And that's what we're all aiming for, aren't we? We want to send good people out into the world, people who make things better for everyone around them.

I actually believe it's what kids want too, to be honest. They just need the tools. Maybe reminding them that there are people in the world who are suffering, who need our good will and our thoughts and prayers, will open their little hearts wide.

If You Don't Tell Your Kids, They're Going To Hear It From Someone Else

I learned this one the hard way. My sons heard some terrible things on the playground after 9/11. Racist, divisive, noxious stuff that took months of reprogramming, if you will, to finally exorcise. Because already the opinions and thoughts of their little schoolyard playmates carried a powerful weight.

If I had talked to them about what I saw in the world, (terrorism, obviously, but also amazing instances of love and compassion that stole my breath) I could have saved myself a lot of trouble.

There Is A Case To Be Made Here For Empathy

"A sad thing happened today, to some people who live in another country. We need to take time to think about the people who were hurt and the people who are still afraid. We should try to think of a way to help them." I wish I had said this to my kids. I wish I had taught them that when bad things happen to other people it's our job to help, and we should be thinking of them instead of ourselves.

Empathy is a powerful emotion. And when you're trying to explain empathy to your kids (who, if they're anything like mine, are living in a rewards-based environment) it's a tough sell — but in the end, it's more than worth it for them to understand what that means. There's no reward — in fact, empathy makes life sort of harder. But I think it might also be the path to a better world.

So yes, tell your kids about the tragedy in Brussels, understanding that by doing so, you're helping to grow a new kind of generation: one that may be better equipped than us to handle such hard times.