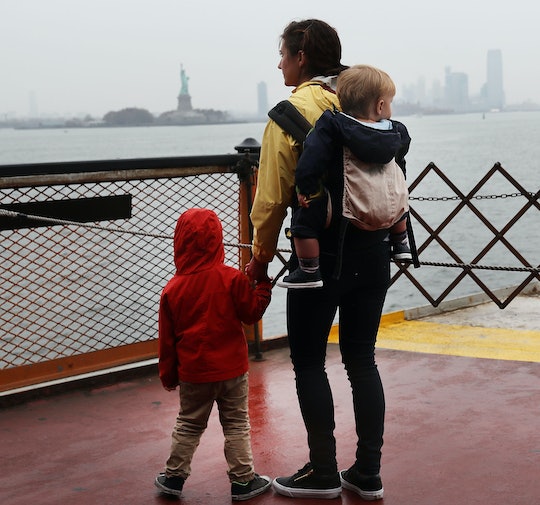 How To Talk To Your Kids About The Inauguration

Your kids are natural little mimics. They're stealthy about it too: They hide behind doors, in the shadow of a stairwell. They pretend to be watching TV when they are not really watching TV so they can study you. They want to know what you think, even if they can't yet understand why they want to know what you think. Because you are their best guide, their most feared critic. Your admiration, your feelings, your world view... it's as important to them as the roof over their heads. Which is why it's crucial to really consider how you talk to your kids about the inauguration. You are how they learn.

I'm going to go ahead and assume I'm talking to a mixed audience here, a divided group of people whose only common thread these days is the fact that they simply can't understand each other. While some people might think of the incoming Trump administration with foreboding and horrified dismay, others are watching a man they truly believe in get ready to take office. They feel invigorated by his energy, buoyed by possibility. The first set of parents, who worry for the future of our country under a man who, at best, is clearly unqualified to run the country and, at worst, a serious danger to our future, might not know what to say to their kids.

Here is what I think I would like to say to my own children:

Have faith. Pay attention. Everywhere around you, there are people who will rise up. Who will take up the cause. Who will do what's right. I am one of those people. I might not like the new president, and I am worried. But that's OK. Because worry isn't always a bad thing. Worry for you is what makes me want to be better, to do better. And just like I worry about you, somewhere out there are people who don't agree with me at all. But they worry about their kids too.

Sure, I would talk to my sons about the inauguration. But I would focus more on the Women's March on Washington. On the hundreds of sister marches happening not only across the country, but across the globe. I would talk to them about the power of many thoughtful, peaceful voices against tyranny.

I would say to my sons:

Be kind. Be generous. Be watchful. Be careful. Be strong. Be protective of people who are powerless to defend themselves. Be courageous enough to speak up when you see something you know right down to your toes is just wrong. Be empathetic, even when you don't agree with someone.

I would say these things, because I have hope for the future. Because I believe we all love someone, that we all want more for someone than we had for ourselves. Not everyone defines "more" with the same metric, but there you have it.

I hope because of my kids.