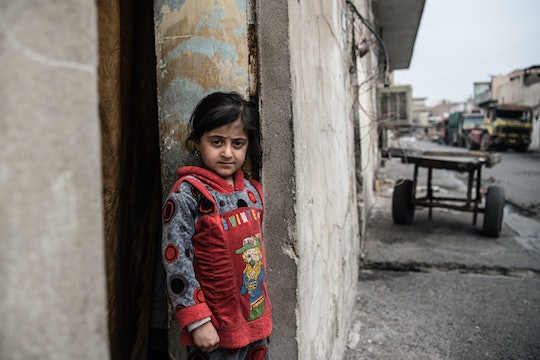 How To Talk To Your Kids About War

My son turned six-years-old when 9/11 happened. He was in school that day, and he was expecting to come home to a birthday cake, presents... the usual accouterments. I did my best to make his day sort of special, all while thinking of what that day would mean for our world. What it would mean for our future. He was only six-years-old, and already I was trying to figure out how to talk to my kid about war. Because suddenly it felt very present, in a way it had never felt present in my lifetime, let alone his lifetime.

I did my best. Actually no, that's a lie. At first, I tried to shield him from every terrible detail. He was only six-years-old, and I figured he deserved a few more years of peace. But, of course, I could not control every aspect of his day. He heard things at school. And he had questions. I tried to explain things in a way a six-year-old could understand. I tried to focus on acts of heroism versus acts of terror. I tried not to talk about what the future might bring. In other words, I'm ashamed to admit I tried to sugar coat what war might actually look like,

We live in very different times now. Children are exposed to information at a far faster rate than their parents might even realize, even small children. As President Trump drops bombs on Syria, as tensions heat up with North Korea... perhaps it's time to get real about talking to our kids about war.

According to Caroline Knorr, senior parenting editor of Common Sense Media, the first order of business is making sure your child feels safe. Because their world view is small, and they need to be able to feel like they have even the tiniest bit of control in their own sphere.

A child’s biggest concern is ‘Am I safe? Are my parents safe?’, so you want to reassure them, ‘We’re OK.'

Knorr also told The Post Star that kids want to know their families are safe.

Listen to their questions

Kids (as most parents know) are wiser than they seem, and if you listen to the way they ask their questions, you can let that be your guide for how to respond. Jamie Powers, program director for the Center for Children & Families at Glens Falls Hospital, said:

Let them lead with their questions. You want to do your best to answer honestly while being mindful not to overwhelm them with too much information. Try not to give too much graphic content, or things that aren’t age-appropriate.

Try to be as honest with your information as you can, without going overboard. It may feel like walking a tightrope, but the way you explain war to your children could affect the way they see the world down the road. With that in mind, the American Academy of Child and Adolescent Psychiatry (AACAP) recommends parents "avoid stereotyping groups of people by race, nationality, or religion. Use the opportunity to teach tolerance and explain prejudice."

The AACAP also recommends coordinating the sharing of information with your child's teacher, as well as family and friends. Try limiting the amount of violent or troubling images your child sees on television or the internet. And, if you do notice any physical or emotional signs of stress, or any excessive fixation with violence, it's a good idea to contact a mental health professional.

Let them be kids

Yes, the world is a terrifying place full of uncertainty. But there is also beauty. Perhaps the most important lesson I learned with my son was to just let him be a kid. The best gift I could give him was to keep my own worry for the world separate, and take joy in all of the beautiful things he brought to my every day life.

Answer their questions honestly. Teach them empathy, and tolerance. And above all... love them enough to let them be happy, even if the world is falling apart.