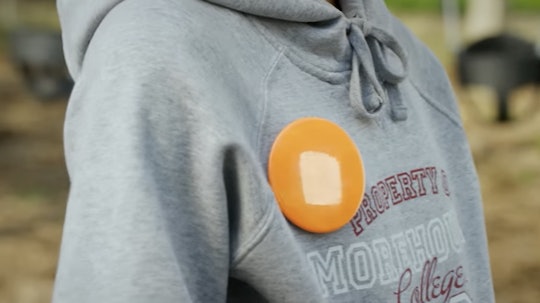 How To Talk To Your Kids About #WearOrange Day

Every day, 296 people are shot in America. Every day, 89 people are killed by gun violence. These statistics from the Brady Campaign to Prevent Gun Violence, definitively show that the United States has a serious gun problem. That's why this week, more than ever, it's important to talk to your kids about #WearOrange day and what it represents.

Sometimes it can feel hard to escape the stories on the news ("Toddler shoots sibling accidentally," "Man shoots pregnant wife," "Teenager brings firearm to school"); there are so many stories about gun use gone wrong that can blend together and feel overwhelming. And still, it’s an issue that can get ignored by lawmakers, at least until the next mass shooting occurs.

That is why on Thursday June 2, social media users took a stand against gun violence, in celebration of Wear Orange Day, a day in which people everywhere, including celebrities and organizations, are encouraged to don the color orange for National Gun Violence Awareness. (You may have seen Amy Schumer, comedian and avid gun control advocate, posting some orange-clad photos on Instagram while urging others to do the same.)

Wearing orange is supposed to draw attention to the prevalence of gun injuries and deaths in America. Many gun victims are under 18. Roughly 48 kids and teens are shot every day in murders, assaults, suicide/suicide attempts, and accidentally, making it especially important for parents discuss gun violence and gun control with their children.

#WearOrange is an important way to shine a spotlight on the gun victims and show support for enacting common sense gun safety laws. But why orange? According to the Wear Orange organization’s website, “The color orange symbolizes the value of human life.”

The #WearOrange movement began in 2013 after Hadiya Pendleton, a 15-year-old high school student from Chicago, was shot and killed by gang member on the South Side just one week after performing at several events coinciding with President Obama’s second inaugural parade. Her close friends and classmates chose to wear the color orange to remember her and raise awareness about gun violence — especially the risk it poses for teenagers — and because hunters wear orange in the woods to protect themselves from being shot. To them, wearing orange is a signal to others that the wearer does not want to be the next shooting victim.

Founding member and president of Project Orange Tree, Nza-Ari Khepra, said Pendleton’s murder ignited action against gun violence in her community. “After we lost Hadiya, there were a lot of emotions going on,” she told CNN last year. “The conversation motivated students and community members to get involved.”

This year’s National Gun Violence Awareness Day comes at an all to important moment when gun safety is, once again, at the forefront of the nation’s mind. On June 1, just one day before wear orange campaign, the University of California, Los Angeles campus was put under lockdown after police responded to reports of a shooting in the university’s engineering building. Two men lost their lives in the incident, an apparent murder-suicide. Wearing orange today seems especially poignant as a way to remember William Klug, the UCLA professor who was killed yesterday when former student Mainak Sarkar opened fire, but it is important to remember that Klug is just one of some 108,000 people who are shot every year in the United States (32,514 of those victims die from their wounds).

Wear Orange hopes to make it easier for people to express their support for the type of common sense gun solutions that could save hundreds of thousands of lives. “Wear Orange is… a celebration of life—and a call to action to help save lives from gunfire,” the group writes on its website.

If your child is asking you why every one is decked out in orange today, take the time to explain the movement and what gun control means for them. And if you have guns at home, it is vital you talk to your kids about gun safety. If they don’t learn about guns from you, they’ll probably learn about them somewhere else.

Kids see guns on TV or in movies and develop a warped view of firearms. It’s one thing to see Captain America taking down Hydra and the Red Skull one bullet at a time, but it’s a totally different thing to understand gun violence in the real world. Use #WearOrangeDay as an opening to discuss gun violence and gun control.

Obviously younger and older kids need different information but either way, it is vital that parents stress how serious the subject of guns is. For younger children, it is important to differentiate between pretend and reality. Even if you don’t allow your kids to have toy guns, it is more than likely one of their friends has one so they have probably played pretend shooting games. You should explain to your child that real guns, unlike the toy guns they play with, are dangerous and can seriously injure or even kill a person. Emphasize the difference in a way that will stick.

When it comes to real guns, it gets pretty straightforward. Younger children need to understand a few fundamentals surrounding guns such as how to behave when they see a gun. Kids Health advises parents to teach their kids to follow a few simple steps when they come into contact with a firearm. When your kid sees a gun, you should teach them to stop whatever they are doing — teach them to never touch the gun, even if they think the gun might be a toy, and to leave it alone. Tell your child that they should then leave the area and go tell an adult.

It is crucial that your child knows to leave the area to avoid being hurt by another child who may not know these rules. Remember, repetition is key. Treat this lesson like Dora the Explorer would and repeat it to your child every month or so to make sure it sinks in.

If your child is a little older, you can open up about the real risks of gun violence and the topic of gun control. Try to have an actual discussion with them about what they think about guns and who should have them. If they are mature enough, you could even take the time to explain firearm laws, the Second Amendment, and the politics behind gun safety bills.

#WearOrange day is just one way to raise awareness about the prevalence of gun violence in America but there are more steps we can take.

Until there is comprehensive gun law reform, it is important to prevent shootings by starting in the home. Teaching your children about gun safety is just one step you can take to save lives.

More Like This
What Is RSV?
Prince George Reportedly Got Sassy In A Fight With A Classmate
Can Elderberry Help Prevent Illness In Kids? Doctors Weigh In
The Best Halloween Family Pajamas To Match Your Boos