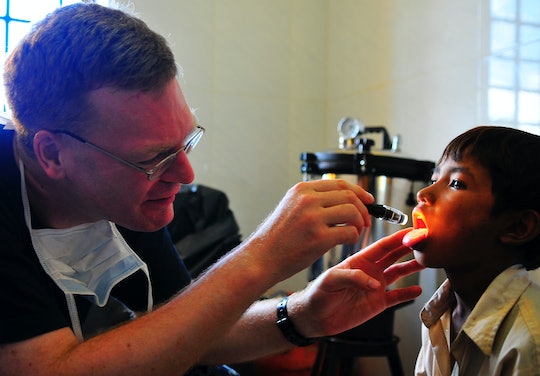 Talk To Your Pediatrician About The ACA Repeal

As of last week, Republicans in Congress are now in a position to repeal the Affordable Care Act, outgoing President Barack Obama's landmark law that made healthcare accessible to millions of people in the United States. Although President-elect Trump and GOP lawmakers have talked about an alternative to replace the ACA, none of them have come up with a substantial and objectively effective plan. That's left parents across the country worried about their children's medical care. Not sure how you would be affected? Here's how to talk to your pediatrician about the ACA repeal's impact on costs and services.

If Republicans repeal the Affordable Care Act in part without a replacement plan, that could leave about 13 million children without health insurance by 2019, according to Forbes. And a recent Congressional Budget Office report found that a partial repeal would bump the number of uninsured people by 18 million within the first year of doing so. Never mind that premiums would also increase by 20 to 25 percent for individual private policies in the first year, the CBO reported. Although repealing portions of the ACA won't yet affect key provisions important to parents, speaking with your pediatrician now could help you prepare for what may come.

What About Treatments & Costs?

Under the Affordable Care Act, a host of preventive services have become available to parents and their children at no-cost. That includes vaccines, genetic screenings, and vision and hearing tests, among others. If conservative lawmakers repeal the ACA, even in part, that means parents could lose access to crucial well-baby visits that allow them to maintain and improve the health and well-being of their newborns and toddlers.

Without the ACA, insurance companies can reinstate co-pays and deductibles on preventive services for your children, which in turn could cause families to scale back the medical care they receive. Talk to your doctor about what types of services they covered before the ACA was implemented and whether or not they will continue to do so — and at what cost — if the healthcare law is repealed. Ask your pediatrician if they have payment plans available for those services that either may not be covered by your new insurance plan or come with a high deductible or co-pay.

If You Have A Child Who Has A Chronic Condition

Parents are understandably worried about what the repeal of the Affordable Care Act would mean for their children who have chronic conditions. As one mother told The Los Angeles Times recently, her daughter, who has a congenital heart condition, could "die without these protections" afforded to her through the ACA. Trump has said he intends on preserving the pre-existing condition provision, but how that will happen is unclear. Republicans have floated the idea of high-risk pools, but as the Commonwealth Fund noted, high-risk pools have proven to be largely expensive and unsustainable.

Explain to your child's doctor the benefits you're most concerned about losing, and ask whether or not they would cover those treatments, at what cost, and under what health plans if the ACA is repealed. If your pediatrician will no longer cover kids with pre-existing conditions post-ACA, then ask them about other providers in the area and whether they could refer you to another doctor who provides the same level of care at an affordable cost. Although the future is uncertain, exploring all your options now can help you decide on the best alternative plan for your child come the inevitable.

Staying With Your Pediatrician... Or Not

Overturning the Affordable Care Act would not only impact coverage and cost, but it could also affect your child's relationship with their doctor. Without the ACA, you may be forced to change your plan completely, which means — if your pediatrician is not in that plan's provider network — you may have to change doctors completely. And that could be hard for both you and your kid. Ask your doctor about what insurance companies they belong to and if those insurance plans cover the services you need at an affordable cost. Knowing whether or not you could stay with your pediatrician may help ease your mind.

Republicans still have yet to release a comprehensive replacement for the Affordable Care Act, which has made parents across the country uneasy. Having an open conversation with your pediatrician, then, about a future without the ACA may help you mitigate the damages of what's to come, even if that's uncertain.